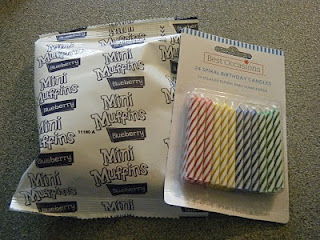 One of my own personal goals for AJ is to have him blow out his candle on his 4th Birthday Cake.  I bought a pack of candles a while ago so we could practice. In feeding therapy this week, I purposely brought mini muffins so his therapist could see what he does to them...oh, and how he eats them.  He still wants to squeeze and squish mini muffins (and cupcakes) to smithereens.  At one point cupcakes were a sensory activity for him, so I think thats why he still does it.During therapy, we slowed him down and were helping him take bites, or break it into pieces, instead of smushing and then retrieving a piece.  He eats them just fine, although they are a messy food.


Why not put the two together?
This was a great language opportunity for him: eat, more, please, muffin, blueberry, yummy, mmmmmmm, no touch, hot, BLOW, gentle, take a bite, candle, YAY! 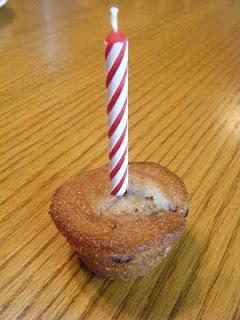 He followed "no touch" very well and realized quickly he wasn't to touch while the candle was lit or even in the muffin.  We used a few candles, reliting each a couple of times.  He's got the mouth placement, just not pushing the air out yet.  He watched me do it, while I encouraged him to do it with me.  I would blow on his face first, and then say "BLOW!".  We used to blow on his face before he was implanted.  It was THE ONLY WAY that we could calm him.  I'm serious, the only way. Now it makes him smile and giggle.  Wow. What a change.
I think cognitively, he totally got the concept of blowing out the candle.  We continue to work on noise makers, horns, recorders, bubbles, and the like to encourage blowing.  He now makes the mouth placement if I hold up the bubble wand to my face, or his. 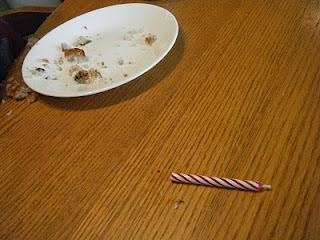