Ninja with a Pink Cup

Part of the fun of having this blog is to come up with some INSANE post titles....

We have lots of updates so I thought it would be easier to smush everything in one post, than several separate posts.

Cochlear Implant Process Update
The case worker sent the letter of approval to the insurance company and to our surgeon's office. She also emailed me a copy, per my request, which I received a few minutes ago. We need BOTH primary and secondary insurance approvals or denials (in our case-approvals-just waiting on the state) before they will schedule AJ's surgery. We are on day 51 of waiting for the state's approval.

In the meantime, we are packed and ready to go for his overnight stay at the hospital. Everything except the things we use on a daily basis, like his cuddle Tigger, pillow, my contacts, etc. Daddy went out and found button up shirts for him and all of his zip-up/2-piece button up "Hef" pajamas were set aside for the hospital stay and post-surgery.

In preparation for our super-sensory kid wearing a bandage on his head for a few days, we have been wrapping his head with an ace bandage. He looks like a little ninja :) 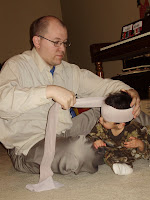 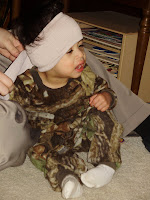 Physical Therapy
AJ is definitely growing again. He's backed off on the walking...again. His hamstrings are wicked tight. I mean tight. It has been a while since I've seen him take a few steps and fall backwards-almost tipping. This would be his hamstrings tightening and actually pulling his body backwards-making him fall. Back to the infant massage several times per day.

His PT has been amazed with his fast progress recently. Both the stairs and the stepstool were goals on our last IFSP. We are now walking him up and down the stairs. We are still to encourage him to crawl up and down, but need to faciliate the walking. We have also moved on to getting into his car seat on his own and the beginning of potty training. We were lucky to have his PT here twice this week :) Today, being that it was a warm 34 degrees out (haha) we had him make his first attempt to climb into his carseat on his own. He did better than his PT expected.

Occupational Therapy
We continue to work on dressing. We dress him in standing, which some people find odd, but it helps improve his balance. He can pull his shirt up and down, take off his socks, and put his arms in his shirt in like a pro. Workin' on the whole pants thing.

We are also working on marking paper (coloring), ripping paper, and dare I say it, cutting. His OT brought a special scissors last week that we've been trying with him. AJ's midline (bringing hands together to middle of body) has been improving, so we hope this will help with stacking blocks and putting objects "in" a container.

Language/Early Education
Due to the holidays, we didn't see AJ's TOD for a few weeks. She was extremely impressed with his progress when she saw him last week. He turned to the drum upon first presentation...same with the cowbell. I get such a kick out of watching AJ watch his TOD sign. :) We still have yet to make a decision on which communication option we desire for AJ...but his TOD is patient and answers any/all questions we have. We are sort of in limbo at this point. But by the time he has surgery, we need to make a decision-at least a path to start on.

AJ's TOD and I discussed, at length, our tour of Lowell. A few days after our tour we had a bit of scare. We were unsure if our district would contract with Lowell. Certain school districts do not want to do so and claim they can provide the kids with services in their own district. This may be true for some kiddos, but in our opinion, not our AJ. Not yet anyway. Thankfully, after several phone calls, we're in the clear. We will have our transition meeting, with our Birth to 3 coordinator and the School District Rep, in about a month. A few weeks after that will be his first IEP meeting which will include those two people as well as AJ's new teacher at Lowell, and his current therapy team.

Yesterday, he was all about signing "more", when I wasn't looking. While he was feasting on my Mom's awesome BBQ pork, he decided to sign more while I was flipping through a magazine. Great-Grandma was watching him, as was I out of the corner of my eye. Sure enough, he'd sign when I'd go back to the mag. Stinker. It may come as no surprise that I haven't been able to get his signing on video yet....

Since we wrap his hands individually with coban, so I decided to try wrapping his hands together on Tuesday. He sat for 15 minutes and watched his light toy and didn't fuss at all. The next day he was coming to midline and signing more like a champ. I think I'm on to something.

Explanation: Coban is a self-adherent wrap that sticks to itself, but does not stick to other materials or skin. You can find it by the bandaids at the drugstore. But I will warn you its $5 for a tiny little roll. AJ's PT and OT introduced us to Vetrap. It is most commonly used on horses and comes in a variety of colors. Vetrap is made by the same company as coban, and is virtually the same thing-it just costs a whole lot less! I get AJ's HERE.

Feeding Therapy/Oral Motor Therapy
Bah Humbug. Over the last two weeks, AJ has gone from drinking his milk and water like a champ, to not drinking anything at all. We have tried everything to get this kid to drink. Then he started doing the same thing with food. Talk about a food & drink aversion. This...is NOT good for a child who is supposed to be getting 1500 calories per day and is walking around all over the place. AJ's eating/weight issues are one of my biggest stressers. Most of you know that, and know that it really bothers me when we have a setback or issue in this department.

At feeding therapy yesterday, his SLP gave him banana milk in a special pink cup. The cup is called a Flexi Cut Cup and can be found HERE. We have the middle sized blue cup, but the pink one is a smidge smaller and works well for him. He had great lip closure, NO leakage, and loved the milk. Whew. His SLP thinks that he probably gulped too much liquid while drinking recently and that sent him backwards. He did drink some of the milk in his sippy, and went back and forth between the two cups and his scrambled eggs. He drank 16oz of banana milk yesterday. We have to slow him down and teach him how to control the cup, taking breaks between sips.

His SLP was very impressed with his use a fork, his ability to turn it around and know when he wasn't the correct way. She was excited to see him go after some eggs that had slipped out of the bowl and onto the tray. What's so big about that? He went after them with his fork, not his paws. He's using his fingers to push foods (raisins, fruit loops, etc) to the sides of his mouth. We have to watch him with the raisins as she thinks he's not chewing them properly and swallowing them when they become "slippery" and flat. We also need to help with his bite & tear skills...meaning when he eats soemthing like chicken nuggets offer him a nugget to bite and tear while he's still got smaller chunks on his plate. We will continue with using the Nuk Brush , Probe, Small Textured Spoon, and Z-vibe tools to encourage lateral tongue movement, chewing, and biting. 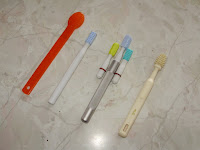 Last night, AJ's Dad brought home chicken nuggets for AJ. As always, AJ crawled up on Dad's lap when he sat down on the couch. I come into the room, and there are my boys, chompin' on chicken nuggets and watching the Bucks game. It was just too cute for words. For a few moments, I just sat and watched the two of them and was in bliss that my 2 1/2 year old was actually eating and happy about it.

Banana milk is hard to find around here, but after naptime, we'll be stopping and getting it wherever we find it. (I already checked, they don't make banana powder for flavoring regular milk). We and his team have all agreed that his highchair is still not benefiting him. He's just too small, among other reasons. This morning I brought his other chair back up (without the tray) and it worked like a charm. I managed to get him to drink strawberry flavored milk (whole milk w/strawberry syrup) this morning...along with cheesy potatoes, fruit loops, and Captain Crunch's Crunch Berries. Whatever WORKS.