AJ's been on P2 (program 2 of 4) now for a few days. We saw his eyes widening as soon as I lifted my finger off the remote button to bump him up. After that initial reaction, we have not seen anything negative or showing us that the level of sound is bothering him.

He went to toddler group (for the first time in THREE WEEKS) this past Wednesday. While I could tell our absence had decreased his tolerance for sitting during circle time, I did not see any initial reactions to the general sounds in the room (kids talking, teacher talking, singing, etc.)

When it was his turn to put his picture on the board he clearly "heard" his teacher say "Quack Quack" as she helped him put his picture above the duck (he whipped his head around). Wow.

I noticed him looking around a whole lot more at the table during watercoloring. Then it was music time. And I PANICKED. When we first observed the toddler group, we happened to be there on a day when they had music. They have this ginormous drum, I mean the thing takes up half the room. It's awesome, and when we first saw it, of course AJ wanted to play with it in the hallway.

I had told AJ's teacher that I would observe him closely that entire day, just incase the noise level began to bother him, I would adjust his program. When I saw the music teacher go in, I whipped out the remote for AJ's CI and my camera (what an oxy-moron hey?) and watched.

She started with the guitar, which he loved. He cried when she put it away. Then the moved on to wooden blocks and triangles. He wasn't overly thrilled, but he participated and had no negative reaction. Then the big guns came in. All the kids crowded around the drum (which is big enough for them all to sit around). AJ LOVED IT! Now this kid loves drums anyhow, but I thought the sound would just be an overload for him. Nope, not my kid. The teacher and SLP's were all watching him to see if he had crazy eye blinking or flinching going while playing with the drum. He did not. AMAZING. He cried when the drum left the room. That is a reaction I'll take any day. Here is a picture of him at the drum. (I tried opened the classroom door and tried to sneak some pictures without the kids noticing-haha) 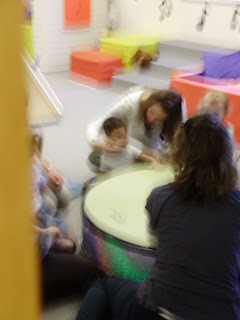 He seemed to do better at snack time, again paying more attention. He turned and looked when one of the teachers knocked on the playhouse door. One of the other kids in the group went on the outside of the playhouse and called AJ's name...AJ turned, saw him, and came to the window where he was standing. I cried. I cried a lot that day. Is it really possible in just three days time that he is doing so well?

Following group, we took a gamble and trecked over to Children's for AJ's first Speech Therapy appointment. We didn't know whether he'd participate, but we thought we'd try to make sure he got at least one session in this week.

He did AWESOME! I had already spoken to his SLP and shared all that AJ was doing. She had shared the news with AJ's audi-they are both amazed, as are we. He is "supposed" to be ripping his coil off every three seconds. He still hasn't touched it. Ask any CI parent, that is the biggest battle at this stage of the game-KEEPING IT ON. He responded to a domroo drum, the "Parents" brand drum, and the xylophone. It was AMAZING. I could seriously watch him all day. We've been in this room a million times and he's never responded to anything. Wow. Oh, and an FYI, I found myself asking the cat "DO YOU HEAR THAT?" after the dog barked yesterday. Yes I need sleep, but most of all, asking AJ that question is already routine in this house!!!

He continues to respond to sounds at home and continues to vocalize-a lot. I had heard of some kiddos decrease they're vocalizations...AJ's has increased. YAHOO! Yesterday he responded to the jingle bells I got him for Christmas and giggled again when the dog barked. He did well during PT yesterday, although I will say that his coil is not PT friendly-especially when he's on the ball. Which was actually good, since the PT student that is with our PT was working with him...and I had her place the coil on each time. Now she can say she's treated a child with a cochlear implant.

I also gave one of our sitters a crash course on AJ's CI yesterday. She hadn't seen AJ in a while, so she was amazed at how well he is doing. She was kind of "creeped out" by the way the coil just "goes" to the magnet on his head, but after a few times she got used to it. I think I gave her a pretty good review, for being a novice myself. :)

Today we plan to turn him up to P3. I just cannot believe he is doing so well. AJ, what a great surprise, keep it up buddy!
Posted by AJ's Mom at 8:46 AM