AJ's surgery went extremely well last Wednesday.  They rolled him in at 12:20 and his surgeon came up to chat with us at 3:15.  They got GREAT responses when they tested the device in the OR.  This is amazing considering there usually isn't anything "great" about the left side of AJ's body.

He did much better in recovery and was still snoozin' when we rolled him up to his penthouse suite.  AJ's room was located in the new West Tower at Children's Hospital of Wisconsin.  It.was.awesome.  The floor was bright and cheery-it didn't look like a hospital at all.  The rooms had 2 flat screen tv's, one for the patient, one for the parents.  The couch folded out into a double bed for parents to stay over and all rooms had wireless internet.  There was a family room, which was a place to hang if you needed a break but still wanted to be on the floor.  There was a playroom and a nutrition room.  A whole room stocked with goodies for the kiddies while they were in the hospital. Someone REALLY thought this through-which us as parents truly appreciated.

The staff, as always, was INCREDIBLE.  With Jeremy being an RN, we form this odd relationship with the staff.  Odd but good.  I think of all, the night nurse was our favorite.

We had an awesome view of Wisconsin Avenue.  While AJ played a rousing game of hold me standing, hold me in the recliner, give me medicine, give me a popsicle, hold me while I sleep, put me in bed to sleep...Jer and I took turns comforting AJ and giving the other a break.  Breaks included, the baseball game, my New Moon DVD (it was very relaxing actually), and posting updates to family and friends via Internet.

AJ woke up from his longest nap (2-6am) and decided to pull down his dressing.  YEAH.  That was fun.  The resident ENT replaced it with a different type of dressing, which had adjustable velcro...that one was even easier to take off.  He thought he was feeling better and went a bit overboard, so after another round of anti-nausea meds and a nice long nap, he woke up to the AJ we all know and love.  He snatched (really he did) his toothbrush from the tray and demanded his sausage, along with signing "eat".  Ok then.  He sat up in bed and watched cartoons.  We left at 10:30am the day after surgery.

I'm still in disbelief he's bilateral.  Really, there's another piece in there?  Hm.  Come June 8th I'm sure I'll be singing a different tune.  I did have a moment in a restaurant today: It wasn't particularly loud, but loud enough.  I wished for a 2nd implant, so that he would be able to hear us in noise, then realized he has one!  A little bit of a brain fart turned into a wonderful epiphany!  We put a new ticker on top of the blog to countdown the days until his 2nd CI activation.

AJ's doing very well. His incision is healing incredibly well and he was off pain meds the 2nd day after surgery.I've been a bit obsessed with his incision, as the first surgery it was much larger than what I was expecting.  This one is smaller and healing at a record pace! We see the surgeon for a post-op visit on Tuesday.

A big thank you to our visitors while AJ was in the hospital!  Both of our Mom's stayed all day with us-which was a great support for Jeremy and I.  AJ's teachers came and brought get-well cards from his friends at school...SO CUTE!  AJ's audiologists came up and visited with us. Pea's Mom came...and brought me Edward!  I mean...she brought AJ a Brewer's blankie, a much needed Starbucks for me, and a card with Edward on it :)  Thank you to everyone's prayers, well wishes, and positive thoughts!  We feel the love people!!!!

I have SO MUCH to update. My poor blog has been neglected. It will have to wait another week or so. AJ's IEP is this Friday, so we're focusing on that. Until then, here's a photo of our little man from today. He's doing great! 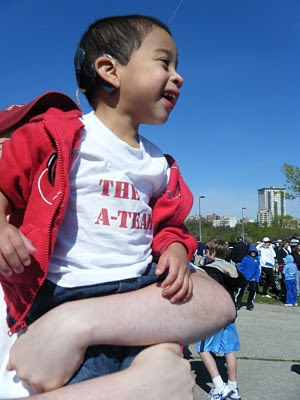