Yesterday I went out on a limb and offered the box of dog treats to AJ.  No, not to eat.  He promptly stuck his hand in, took out one treat, and handed it to Rocky, our German Shepherd.  After initial shock and awe, followed by loads of praise, I offered the box again.  He took out another bone and gave it to Sunny, our yellow lab.  My initial thought was that AJ would put the bone to his own mouth.  No.  He knew the objects purpose. 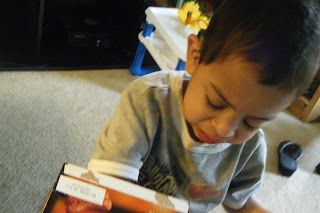 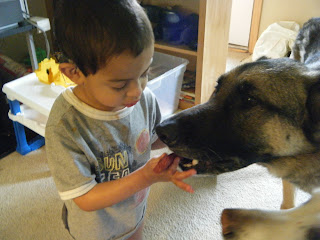 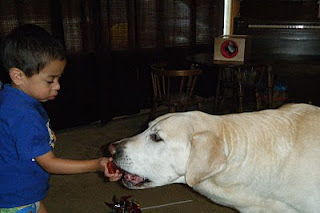 Rocky, is uber gentle.  I mean if you say the words "gentle" he won't take it.and he'll go lay down.  He's a shep, but thinks he's a puppy and doesn't know he's suppose to host the all the stigmas of shepherds.  He's my gentle giant.  Now Sunny.  He's not vicious either, he's just a bit excited that he's getting treats.  And, sometimes I think he thinks he's getting the last treat ever in the whole wide world.  But with AJ, he was great.  Something about our giant dogs and their precious little boy.

Today, AJ picked up Rocky's frisbee and gave it to him.  No prompts or anything by me.  We were standing by the door and he just picked it up and gave it to him. Another round of shock, awe, and praise. Rocky is a frisbee freak, so this thrills him to no end.  I give it a day until Rocky is running around behind AJ trying to get him to throw the frisbee.  Throwing is one of AJ's goals @ school...perhaps this may work for both parties.

We followd the inpromptu frisbee giving with a few verbal prompts.  "AJ, give it to Rocky."  To which he did.  No pointing, no visual cues.  Just my voice...and a sweet pointy-eared dog staring directly at him channeling " frisbee" through his eyes.

I took it one step further and asked AJ to pet Rocky.  He took a step toward Rocky put his little hand on his neck and pushed in a little.  Amazing.

I purposely did not "model" these activities.  I wanted to truly see what AJ understands on his own.  The dogs have been here since he came home, so they certainly aren't foreign to him.  He knows they are large, take up a lot of space on the floor, and that when they bark, someone is at the door.  If they get in his way, he climbs over them or pushes them out of the way.  Somehow, the dogs are just fine with that, which boggles my mind.  AJ sometimes kneeds Sunny's back like a cat does to your lap.  And he just lays there.  {Sunny's coat also happens to be a great sensory experience for AJ's legs and feet} Although they've been around, AJ hasn't "sought" them out much.  Until now.

Rocky came in the room a bit ago and I asked AJ, "Where's Rocky?"  He stuck out his arm and reached for Rocky.  Today, when I gave him a treat for the dogs, he whipped his head around to look for them. The amount of eye contact he's giving them is amazing.  He's looking to find them, them watching them as they retrieve their treat from his hand.

That, my friends, is called gigundo progress.  And yes, in my dictionary gigundo is a word.


Today: I am proud of all of my boys. 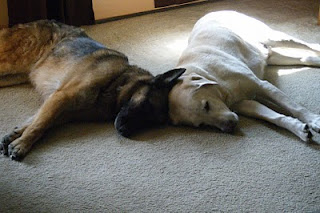