So apparently my post which included the line "Jeremy's brain gets all funky and we try to figure it out," was quite funny.  I don't disagree.  Even Jer laughed when he read it.

I'll try my best to give a brief synopsis.

Three weeks ago, Jeremy started feeling dizzy.  His primary doctor thought it was labrinythitis.  We were told to go enjoy our long-anticipated, we-hadn't-been-away-anywhere-in-over-a-year mini vacation to our B&B just outside of Madison over Memorial Day weekend.  If it didn't subside, he'd see a neurologist the following Tuesday.

We should have stayed home.

After coming home on Monday, Jeremy and I spent a couple of hours in the ER, arriving home at about 2AM.  His dizziness had not subsided, but had gotten worse, so we thought better safe then sorry. His symptoms also included tingling on his right side and on the left side of his mouth.  They did a CT scan and sent him home with the diagnosis of dizziness and told him to follow up with the neurologist the next day. Helpful.  We were entertained though...as there was a cocaine addict handcuffed to his bed in the "slot" next to us (those curtains give soooo much privacy, not) who was singing away and trying to schmooze the female staff.  We became friends with the cop who was spending his shift with the cocaine dude.  Fun times.

The following day he saw the neurologist who sent him for an MRI of his brain and spine.

The MRI showed a lesion on Jeremy's brain.  Get ready, set, go, for a mammoth race to see how many needles we can stick Jeremy with and how many procedures/tests/labs we can run.  At this point, this whole episode is being called a 'clinically isolated syndrome'.  Meaning, freak thing, that just happened.   We have the option to treat with MS drugs, or not treat.  There is no definite test for MS.  It could be a freak one time thing, or it could be the first flair up of MS. Are we having fun yet?

Regardless if it is a one time thing, the treatments could be preventative.

Mixed in all this fun was AJ's 4th Birthday Party and AJ's 2nd CI activation, which was also on our 9th wedding anniversary, AJ's school field trip and last day of school.  Whew!  I took AJ to school the day of activation, dropped off some wickedly cute cupcakes (since of course he had snack that week), came home with lunch, shoveled food into everyone's mouths, and sped off to Children's Hospital to have AJ's left implant activated.

After the activation (which will have its own post soon, I promise) we drove to Jeremy's neurologist's office to hear the news about the "there's bad inflammation, our suggestion is to treat, here's 20lbs of literature to read, you will get better".  Jeremy didn't hear the "you will get better" part, so its a good thing I was there to give him the pep-talk/translation on the way home. His symptoms were fluctating, so that meant his brain was healing. Thats a good thing. We left the office completely drained, and drove home in rush hour, in the rain.

We cried, we laughed, we talked, all as we crawled on 43 South.  Happy Anniversary.  We grabbed subs on the way home (due to the steroids, that was the only thing that tasted good to Jer) and called it a night.

After 2+ weeks home, Jer returned to work this week.  Which has been good for everyone.  His symptoms have decreased dramatically and he's in much better spirits.  Brain funkiness sure does mess with the mind.

I want to thank my Mom for watching AJ over our mini-vacation-gone-wrong...and then coming back hours later so I could take Jer to the ER.  Thanks to Jer's Mom for coming into town and watching AJ during the constant procedures and tests.  You both ROCK.

Another thank you to Jeremy's incredible co-workers.  While I knew this already, this situation brought on amazing kindness, understanding, and support from his entire crew.  I met co-workers who's names are mentioned often, caught up with some I hadn't seen in a while, and they all were able to see AJ.  Under the circumstances, it was wonderful to know my husband was so supported by those at his workplace.  His neurologists are literally down the hall from his office, so not only are they now his physicians, they are colleagues.  Truly awesome.

And how can we laugh about it?  Because otherwise we'll cry.  And believe you me, we've done enough of that.  Have we asked WHY?  Oh yeah.  Its not fair, we didn't need this, as my father-in-law used to say it sucks canal water. But...we can't change it, we can only move forward. One thing we learned with AJ-take things one step at a time.  This mindsight was critical to Jer's brain funkiness.  Jeremy and I keep each other in balance.  He's very laid back.  I'm more structured and gung-ho, if you will.  To see my hubby not laid back, made me out of balance.  We're just about back to 50/50...I think.  Jeremy is feeling better, and for that, we are VERY THANKFUL. 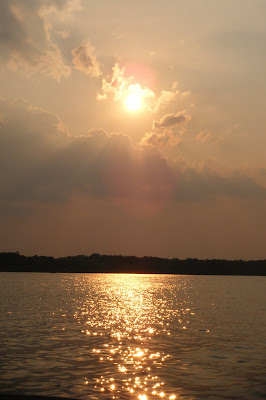