I seriously cannot believe AJ is finished with his 1st year of preschool.  When did that happen?  Wasn't it just yesterday we were struggling to find a backpack that he could carry? (Didn't Happen). Wasn't it just last week we went school supply shopping? Wasn't it just yesterday Jeremy and I dropped him off and I was stifling pyscho-mommy tears down the hallway, breaking into a fast-power walk so that no one would see I was about to lose it.

I am always thankful for pictures and videos.  I know, I know, I drive some of you crazy with my picture taking.  I want to remember these things, peeps. Right, Uncle Dustin?  (Uncle Dustin is my picture-taking partner in crime)

It surprised me to no end to see a photo of AJ and I on his first day of school.  How much he has grown, physcially, emotionally, socially, and as a little learner.

He's a much better walker, both independently and with a hand.  He's taller, which helps A LOT.  He learned how to stand in line (with Mommy) when the bell rang vs. taking off toward the lower level or down the hall to his classroom.  Overall he did very well with potty training at school and was able to step up and down on the stepstool himself to wash his hands.  He learned to get in and out of his chair on his own.  He gained upper body strength and built up his trunk by working with the school PT.  He learned how to fingerpaint, and paint with a brush without putting it in his mouth.

At the beginning of the year there were many tears when transitioning from activity to activity.  He would often have to be rocked to be soothed.  He would self-stim by rocking himself on the floor and/or arch his back in that "I'm a CP kiddo, I know how to use my tone," attitude.  When we walk down the stairs to school, he can't get in the door fast enough.  He's happy to be there.  He laughs and giggles and enjoys his day.

Socially, he's grown a lot.  While it may not show on paper, our eyes see it.  He smiles at his peers.  He engages with them.  He participated in 1:1 activities with a peer very well.  He even asked one of his friends for the glue a few weeks ago by signing "please".  He recongizes and knows ALL of the staff that work with him, which is awesome to see first-person.  His peers took cues from AJ's teacher on how to best get AJ's attention and all treated him like one of their own.  I had been worried they would treat him differently.  Anything but.  That makes me proud, and they aren't even my kids.

As a little learner, AJ has made huge progress.  Everything has been trial and error with AJ.  He was a clean slate.  No column A or B.  A bare chalkboard just waiting for knowledge.  During the month of May, AJ's language via signs exploded.  He resumed using the sign for "more", and added "please" and "eat" to his vocabulary at school.  Since he's been out of school he's officially added "on" and "all done".  He's even putting them together, like "more please".  Although sometimes its tricky, as he goes through his little roladex of signs to get what he wants.  There is less of the roladex idea going on currently, which is awesome.  I don't have time to list all of the gains he's made as a learner, but take my word for it, he's coming a looooooong way since September.

He had made so much progress as a learner.  But honestly, I didn't see it. At first.  This special needs whoo-ha is tricky.

In this corner "Focus on what your child can do, explore their possibilities, cherish every gain".

I'm down for the count.

It really does take a lot for us ok more so me to step back from today's reality and look at how far AJ has come.  I wish each one of you could have been there when we stepped off the plane at Mitchell.  While it often brings sadness, I force myself to look back at those pictures and videos to see JUST.HOW.FAR.HE'S.COME. Because it is so difficult to be positive and la-tee-dah when that second corner fighter is constantly in your head.  He's not the same child who came home.  AT ALL.   I had almost forgotten that AJ crawled just 4 1/2 months after we brought him home.  Jello to Mobile.  That's pretty incredible.

I am impatient.  Of course we want AJ to be doing more, learning more, communicating more.  All of the above box?  Check.  There are hopes and dreams for AJ that we have adjusted, bust certainly not given up on.  While I won't apologize for being impatient, I do realize that we won't get wherever we are going in a hurry.  Steady wins the race.  Unless your driving a canary yellow Porsche 911 Turbo.

A few days before school ended, the class took a trip (with parents) to the zoo.  In the moment, I was frustrated because AJ was not paying attention to the animals, his implant just would not stay on, and neither were his glasses.  Sometimes AJ's delays are ever present and it just.bugs.me. But looking back, it made me sigh with tears in my eyeball when all the kids saw us arrive and ran to greet AJ.  They were so excited to see him.  It made me smile when his teacher showed him the camels. He enjoyed lunch, strolling around in the stroller, and he really loved the carousel. 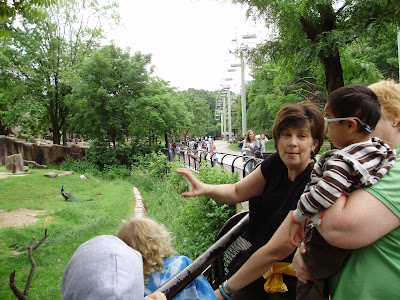 AJ & Mommy on the carousel 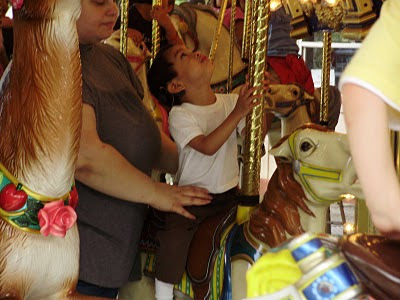 The last day of school was also AJ's first day with two ears! All of the parents were invited to watch a slideshow of the entire year followed by a picnic to a nearby park.  We spent some time at the park, where AJ heard a plane for the first time and really tuned into some of the parents who bent down to talk to him. We were lucky enough to be part of one big happy preschool family.  Its been an amazing year! 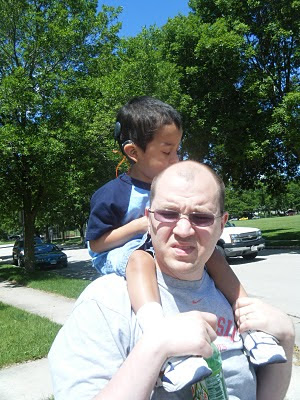 AJ won the "Gold Star Work Ethic" award which read:
AJ worked daily and did whatever our staff
and peers asked him to do.
He works with many staff members.
Way to go AJ!
I'm looking forward to seeing what kind of
progress AJ makes next year, aren't you?
Posted by AJ's Mom at 6:56 PM