This activation was MUCH different than his first one.  He had suddenly turned into such a big boy sitting in that chair.  Pictures will have to suffice, as we DID record it, but I can't get the video to upload to Blogger.


We had him wear his
"ROCKSTAR" t-shirt from Peas: 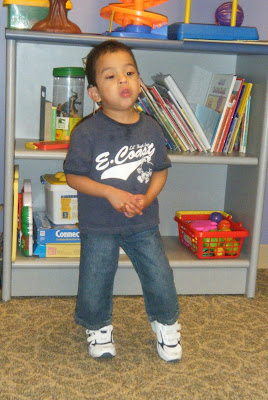 Hearing the BEEPS with his new implant: 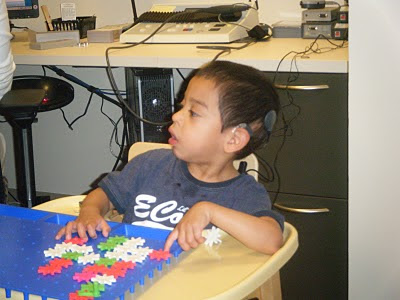 Hearing SPEECH with his new implant: 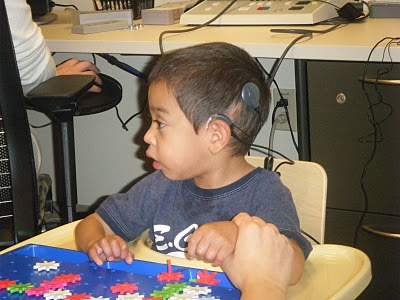 Hearing his audi say his name for the first time
with BILATERAL IMPLANTS
{This was truly amazing!} 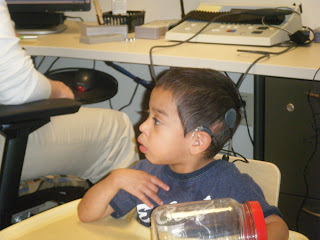 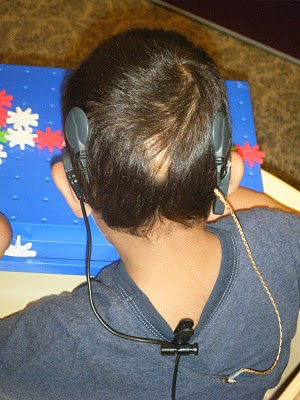 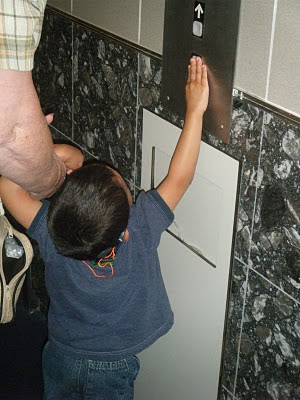 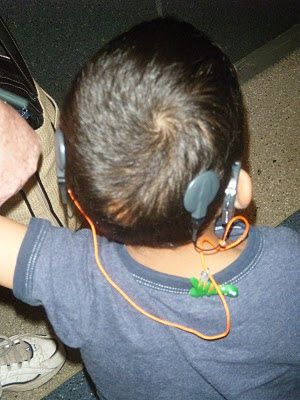 AJ has done extremely well with his new implant.  He's been wearing it with no problem from the very beginning.  We are now on our 13th program (something like that) and he's just now pulling the left off every now and then.  Things sound totally different to him with both implants.  The louder we turn him up, the bigger difference I see.
When his audi called his name, shortly after she added his right implant back into the mix, he TURNED IMMEDIATELY.  At that moment, I KNEW we had made the right decision to go bilateral.  While I knew it was the right decision before, call this moment cement.

He heard an airplane the day after his activation.  He had never paid attention to airplanes in the sky before.  He tunes into the oven timer beeping, and other smaller sounds he never paid attention to before.  He is so much more in tune with his world  The general rule of thumb is that a child has all they need to develop speech and language with one single cochlear implant.  I agree...to a certain degree.  Some kiddos do remarkably well with just one.  AJ needed two.  'Nuf said.
AJ's activation was a special day, as it was our 9th wedding anniversary.  However, true to our past, everything was thrown into one day, so I don't really think we were able to enjoy this moment as much as we truly wanted to.  Shortly after AJ's activation, Jeremy and I had an appointment with his neurologist, which made the day very heavy on our hearts.
AJ has been astounding the critics since his 2nd activation.  And I know he'll continue to do so....
Posted by AJ's Mom at 6:06 PM