1. I've been up since 3am, so I might as well blog, right?  Blame it on way too many Diet Coke's yesterday/last night and the fact that I heard our German Shepherd stuck under our new bed-again.  Seriously.  What possesses him to end up under the bed, when he can't get out?  I'm still not sure how he got under there.

2. My husband is asleep next to me, yet his Facebook status shows him online.  Hm.  Facebooking in your sleep?  That's a new one.

3.  This weekend is officially "Buy AJ his iPad 2 weekend".  Jeremy and I are so excited.  We spent over an hour at the Apple Store a few weeks ago playing with the iPads on display.  Seriously.  What else is there to do while waiting for your table at P.F.Changs?  We were both impressed that all of the iPads had multiple augmentative communication systems for users to play around with.  If I would have let him, I'm pretty sure Jer would have spent the evening on the Puzzle app.  Too cute.  His Otterbox just came for his iPad.  It made me cry.  We are beyond anxious to get our hands on this amazing piece of technology and open a new world of possibilities for our little dude.

4.  Our little dude, who is little, and isn't little.  At last week's neurology appointment, AJ weighed in at 26 lbs.  Say what?  NOT COOL.  Leave it to AJ to worry me a completely different body system while were at an appointment for his brain.  On the flip side, he is now 37 inches tall.  37 inches tall!  He's always grown up instead of out. But this is a little ridiculous!  The boy is all legs.  His neurologist was worried, because his last weigh-in (at urgent care) was 30lbs.  Well, it was an estimate.  He wasn't actually weighed that day. That eased things a bit, but the 26lbs is still a cause for concern, as it would mean he's only gained a pound in over a year.  We have an appointment with his GI doc next week and I'm sick just thinking about it.  I'm already feeling guilty in a million ways about his weight.  What are we not doing that we should be?  Sigh.

5.  Speaking of his brain...we're still on the same dose of Keppra, 2mL twice a day.  It is hard to say if this episode while vomiting a few weeks back was him being lethargic due to the illness, or true seizures.  His neurologist is suspicious of clinically silent seizures.  Meaning, is AJ have seizures and we don't know about it.  Like, as in, no symptoms.  So, we're doing a 24 hour EEG.  That should be fun.  A company will send a technician out to hook him up here at home, then wrap his head like a mummy, complete with cords down his back running into a backpack.  Then its my job to keep this on his for a full 24 hours.  I can already tell you, this is NOT going to go well.  But, I am hoping we get at least a few hours reading to see whats going on with the little guys noggin.  And, his neurologist and his nurse were thrilled to hear we were getting him an iPad, it seems these things are working wonders with their patients!

6.  At the suggestion of another wise special needs Mommy, I found an awesome baby mirror type-thing for the car.  I've been hyper about watching AJ in the car.  Like.a.hawk.  As a result, my neck was getting a bit funky from cranking my head in his direction a million times a day.  The mirror is about half the size of my rear-view car mirror and clips nicely onto my visor.  It also has a ball mechanism, so I can rotate and move it around to just the right angle.  LOVE.  Yesterday was our first day using it, and my neck was patting me on the back the whole ride.  I could see him, and I felt a bit better.

7.  Our new insurance kicked in a few weeks ago and much to our disappointment, PT and OT were denied. On the up side, feeding was approved.  Sigh.  AJ's PT and I made the decision to keep his pool therapy going, every other week, until September at this point.  We'll take it on a month to month basis.  He's amazing in the pool.  You should seriously see this kids face when we turn the corner for the community pool.  He lights up like a Christmas tree.  Totally adorable.

8. I'm turning 30 this week.  A bit of shock and awe in that statement.  I'm definitely ready for my 20s to be over.  I'm hoping for that magic fairy dust that declares "I don't care what people think" and "Do what is best for you".  Anyone have a pouch they are willing to share?  Seriously.  My 20s were packed full of uncertainty.    While I do not, in the least bit, regret being what is considered a "young mom" at 25, being a young special needs parents has taken its toll on me.  I look in the mirror every day and feel 40.  I guess that's what stress does.  Does anyone have botox or lipo in their pouch too?

9.  AJ was finally fitted for his new UCB's and his night splint yesterday.  He was casted 3 times yesterday.  NOT a happy boy.  I don't blame him, but there comes a point where his wailing and carrying on brings a ball of stress and a sense of discomfort to the space and people around him.  Hopefully they'll come in soon!

10. We are finally moved and getting settled into our new home.  After 2.5 years of talking, talking, and talking then trying to move, we've finally made it.  Leaving our first home was bittersweet, and we both experienced emotions this week that were unexpected.   AJ has adjusted remarkably well.  Out of all the things I thought of that might upset him, none of it did.  What did though, was the noise.  We moved from country to city living.  I truly didn't realize how quiet it was by us until we moved.  If you think about it-it is amazing that the sounds bother my Deaf child.  I mean, seriously?  That is amazing.  But he wasn't thinking it was so amazing.  It has helped to sit on the front porch and watch the "noises" as they go by.  Hearing them in the backyard, he was confused and just upset by the sounds.  Pointing out what the things are has helped, as well as exposing him to the sound difference between the front and backyard.  We LOVE having a backyard.  LOVE IT. We did it all for our little man, and couldn't be happier. 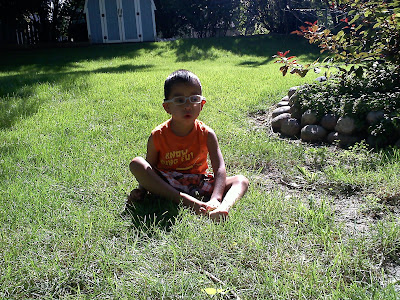