Valentine's is like speed to me.  I get all excited about making rock star valentines for AJ to take to school.
This year, not only could I find the perfect valentine for us to make, we also ran out of time.  So, I had to simplify.  We came up with this: 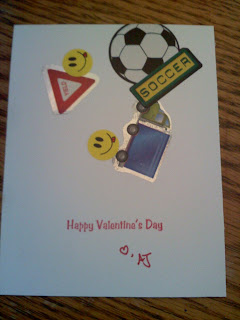 I stamped the greeting and wrote his name and he put the stickers on.  He absolutely loves playing games with stickers.  Put them on your nose and he'll find them in no time at all.  And, of course, it is a great OT activity.  I heard from the kindergarten teacher that the kids all loved them.  Sometimes I think AJ could have given his classmates bags of pebbles and they would have been over the moon.  Our little guy sure has his own fan club.
I made these for AJ's school staff, courtesy of Pinterest: 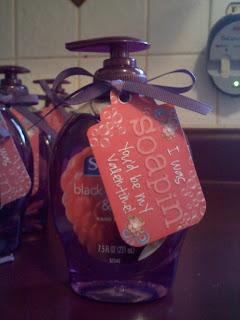 For Easter, the Easter Bunny forgot-ok-has no idea where his basket is.  I saw a cute idea (again, on Pinterest) to dye eggs using koolaid packets instead of the 'ol vinegar and color tablets.  Yeah,  good intentions.  And then I got to thinking about what the Easter Bunny should bring AJ.... 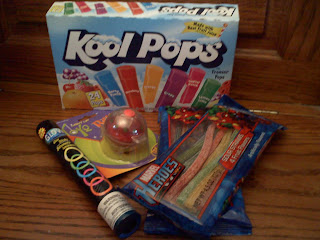 He brought all his favorites: Freeze pops, glow sticks to play with in the bathtub,
sour straws, and a light-up yoyo.
AJ attended church for the first time hearing (back in December we took him for Christmas but later found out his processors weren't working then so it wasn't such an accomplishment then) on Easter.  He did very well and even signed more for the lights after the music was over.  It was seriously cute.  For Easter dinner, he wasn't the least bit interested in eating, he only wanted a freeze pop.  He proceeded to entertain us with that one freeze pop for at least a half hour.  He then devoured several pieces of Irish Cream Pie.
We've settled into a groove where I no longer feel the stress of having to have holidays a certain way.
We do what works and enjoy every moment of it.