My Favorite Adoption Story: One in a Million

I am so very excited to be partnering with Show Hope as a blogger for the Show Hope Blogging Network. I'll be writing to raise awareness and encourage discussion about the global orphan crisis.

Jeremy was very confused when I told him about this particular assignment.

"Well, why aren't you sharing ours?" he said. I could.  But most of you already know those. I want to share a story of incredible love, determination, hope, and grace.

I first met Amy when our names were shouted out in the same small group pairing of a summer women's bible study group. I knew of a few women in our group but didn't really know them. As we went around our precious circle, I learned a bit about Amy and her family.  When she shared her family was in the process of adopting from China, my heart skipped a beat.

A few weeks later Amy came to group clearly smitten.  She could barely contain herself as she flipped her iPad around and showed us a picture of this precious little girl. "Isn't she beautiful?!" Indeed she was.  She shared the story of a sweet baby girl Esther in China who went to heaven {due to a virus + her heart defeat} before her adoptive family was able to bring her home.  Esther's family designed T-shirts printed with "So Loved", with 100% of the profits of the proceeds funding a future heart surgery for an orphan in China.  A sweet angel named Kate had her future heart surgery fully funded!

Amy showed us the picture of "Kate".  And that was that.

A one in a million shot.  Literally.

Amy wrote, "Only God writes a story like this."

And so it was.

That heart surgery?  That was prayed for and supposed to occur in China?  Never happened.

I watched from afar as their family dynamic changed in anticipation for Grace.  I watched Amy fight fear and worry as her sweet baby girl was thousands of miles away, being hospitalized over and over again. I had heard her speak about their adoption process months before and watched her growth and trust in Him. When it was real, she was real. I watched her develop a deep, deep passion for orphans. Hundreds of us stalked her Facebook page for updates while they traveled to China. We waited for that glimpse of the family all together and watched as her little personality emerged slowly but surely.

We watched Grace undergo the heart surgery she so desperately needed.  We witnessed a visceral love and tenderness that goes far beyond what we think we are capable of.  We watched as Grace went from blue to pink.  We saw Grace change by the healing grace of God. Its been a few years since she arrived home and hearing the word grace still causes me to think of Grace.

I'm truly not doing any justice to all things Grace.  I'm really not. 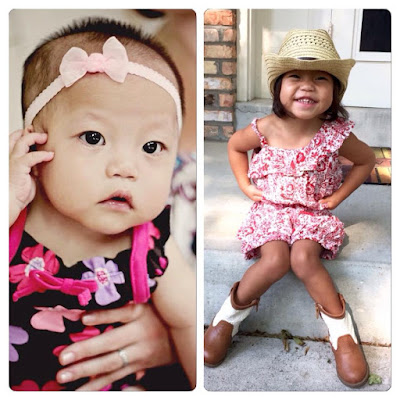 You can find Amy's blog here.
She also contributes monthly at No Hands But Ours
So Loved