Fighting Fear: At the Balloon Festival

We don't tend to do things on a whim over here. Like, ever. So when Jer and I both woke up a few Saturdays ago and announced to each other we should take the kids to the hot air balloon festival we felt empowered.

We packed the kids in the car and made the trek only to be informed that the balloons were not at the festival. They were to return in the evening. We were encouraged to stay for rides and helicopter rides. We thanked the kind parking attendant who told us this before he took our cash, turned around and left. I felt enormously disappointed and slightly panicked. What are we going to do now?

Jer suggested we grab lunch and take the kids to a park we love just another town over. My anxiety crept up slowly as Mimi began repeating the word "balloon" in the backseat. We pulled into the park to find a massive crowd of people gathered for a large children's festival. It seemed there were no parking spots in that tiny parking lot. We parked in a handicapped spot (we have a card for AJ) and I was still worried about him walking so far. My brain was so scrambled I wasn't tuning into the fact that we have a wheelchair in the backseat.

We've only used the wheelchair for days when AJ is sleeping at school and is too incoherent to walk out of school when I pick him up. We also used it for a long trek during family photos. These distances may not be long for you and I, but they are for AJ. I haven't quite gotten used to remembering much less using it more frequently.

Our detour that afternoon led us here: 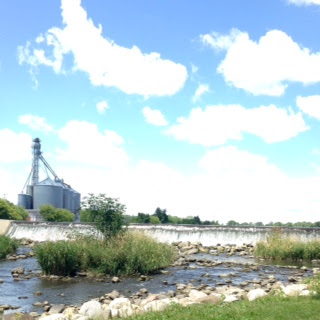 We enjoyed a fantastic lunch with fantastic weather and headed home. Later that evening we one-upped our boldness and headed back to the balloon festival. As we drove along the main road and saw the mass amounts of people I felt that all familiar panic set it. So.many.people. Let me clarify that I am fine in larger crowds. My children are not. We were directed to a make-shift parking lot (a field) about a block from the festival. I noticed some people were sitting up on the hill in chairs so we made the decision to stay by the car and just hang out. Surely we'd see the giant balloons floating back down in the sky from there.

We parked and I realized it was time for AJ's medicine. One thing that I've never gotten used to is traveling with his tray of medicines. I'm not really sure why. Something about the absence of a counter or flat surface makes me, you guessed it, panicky. After giving him his medicine I sat in the car for a few moments to compose myself. Until I noticed AJ seizing in the backseat. After a cluster of seizures, I became completely unglued. Who does this?

After his seizures slowed I spread out a blanket next to the car and we waited for the balloons.

The balloons that never came.

For two hours we waited and waited and realized somehow we had missed them. Perhaps they flew in early? Two hours my sweet Mimi asked for those balloons while my anxiety shot up higher and higher. But after a while I began to witness and experience some things that were beyond the beauty of colorful balloons in the sky. 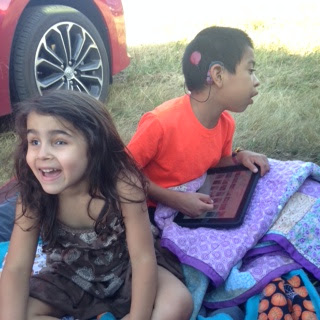 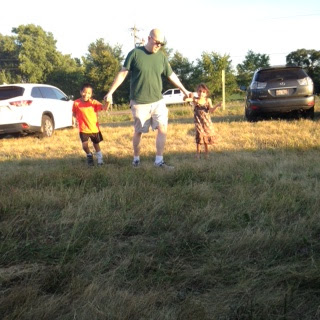 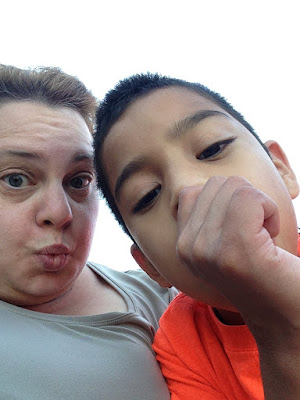 We had time just as a family.

Sweet precious time without any distractions.

Towards the end of our time in the field we walked down to the corner and saw the balloons bouncing up in the air a bit, firing just enough to make the balloons glow in the sunset. I was beyond disappointed that my girl, who can't see that far and loves balloons, was not able to see the hot air balloons. She needed to be right there in the front rows to be able to see the details of the balloons. Being in large groups of people causes her panic because she can't see what's going on. That much movement is very scary for her. So we chose to stay in the field. She couldn't see the tops of the balloons bouncing in the air because of her low vision.

I want so badly to give both of my children access to so many things because of their pasts. I don't want to give them the world by our culture's definition. Culture says I should buy them this because I didn't have it or do this because I didn't do it and want better for my kids. Culture tells me to do it all because we have access to it all. I want better for my kids in a different way. I want to give my children the simple and beautiful. I want to give my kids the opportunity to go to a local community event for free. To see something simple and beautiful. I wanted to see my daughter's eyes light up in seeing gigundo balloons in the sky. The simplest things make her happy. I want to see my son giggle and smile. I don't want my children to suffer. Anymore. I don't say that out of fear that they may some day. I know they will. I say this because they both have already suffered enough. This little trip to the festival seemed beyond simple. This wasn't a trip to Fiji. So why didn't it end up being simple? 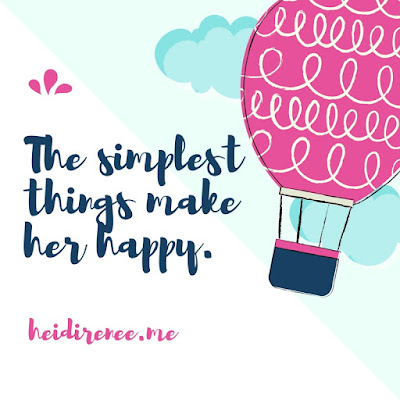 But I do know that we did it.

We stepped out of our fear. 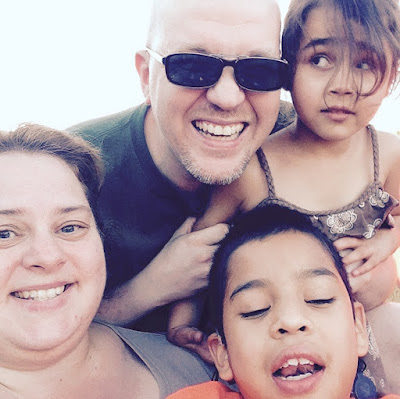