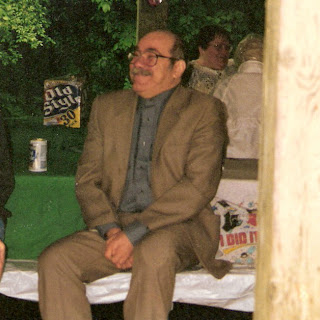 For those of you that don't know, AJ's Dad is very active in the world of Diabetes. AJ's Dad was diagnosed with juvenile diabetes (Type 1) at age 10. In addition, AJ's Grandpa Doug also had Type 1 from age 14 on. Sadly, AJ's Grandpa Doug passed away in 2000 from a stroke and several other complications due to uncontrolled diabetes.

For those reasons, AJ's Dad has made the world of diabetes his passion.

At age 16, AJ's Dad was admitted to Columbia Hospital with the flu. Due to a busy flu season, and no beds available at Children's Hospital, he was sent to Columbia. At the time there were no pediatric endocrinologists available in the area. AJ's Dad was met at the door by Dr. J. AJ's Dad was very stubborn (his words not AJ's Mom's!) and refused to go back to a pediatric endocrinologist. He asked Dr. J if he would be his doctor. Dr. J stated that he did not see patients under the age of 18, but if AJ's Dad would be compliant and do what Dr. J asked, he would take him on as his first adolescent patient. AJ's Dad agreed. As AJ's Dad and Dr. J's relationship grew, AJ's Dad said, "One day I'm going to come work for you."

12 years later, he did just that. AJ's Dad currently works as a Registered Nurse-Diabetic Educator for Dr. J. He educates newly diagnosed patients, long-time patients, and everyone inbetween. Patients listen to him because he "knows" what it is like to live with diabetes. AJ's Dad is also a certified insulin pump trainer for all of the major insulin pumps. He also wears a pump.

Recently, Nick, one of the members of the popular music group the Jonas Brothers learned he has Type 1 Diabetes. He was featured in the magazine Diabetes Forecast. He wrote a song about his diagnosis and the days following entitled "A Little Bit Longer." AJ's Dad is a big fan of this song and wanted to share it with everyone. You may not like the music, but AJ's Dad's is asking you to listen to the lyrics. The last verse says:

So I'll wait 'til kingdom come.
All the highs and lows are gone.
A little bit longer and I'll be fine.
I'll be...fine.

AJ's Dad says hopefully a cure won't take that long....You can listen to the song on our playlist (top of our blog). Please also check out the Diabetes Links. Leave a comment if you have questions or comments for AJ's Dad regarding the world of Diabetes.
Posted by AJ's Mom at 6:40 PM