1. We seem to have a lot of people stalking our house.  Like, slowing down and passing very slowly.  Now, if only they would call and schedule a showing.  We've been looking at houses online again and have a lot of new listings.  Exciting!  Our house looks so bare...I'm starting to miss pictures of my little man and our families on the walls.

2. Last week was a total tease, we had 50 degree weather for several days.  This week, we were hit with more snow.  Our area wasn't hit as hard as those around us, but its still snow! It is supposed to be an early spring.  How about an early early spring?

3. AJ and I both have wicked colds.  His has turned from a head cold to a chest cold.  Poor thing.  We're full steam ahead with humidifiers, even a pot of water on the stove (our house is super dry) and Vicks vapor rub. I kept him home yesterday, in hopes of kicking this thing to the curb, only to find out he does not have school for the rest of the week.  5 days off, with a sick kiddo who doesn't like to cuddle, doesn't watch movies or cartoons, and gets bored very easily.  Fun.  Surprisingly, he's in a very good mood, he just sounds like he's hacking up a lung when he coughs.

4. We've gone a full week already without a bedrail on AJ's bed.  Another big boy moment. He's stayed in bed every single night. He's a CP kiddo, in a regular twin bed (in size and height), with no bed rail.  Amazing.  That is a smile behind the blanket.... 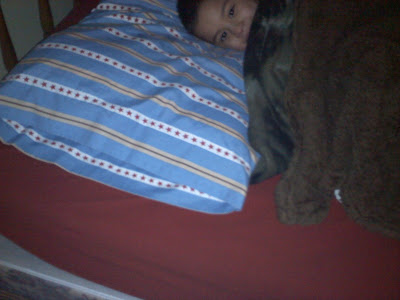 5. For a while I was making our laundry detergent (FelsNaptha, Borax, Washing Soda). It was super cheap to make , and I'm a stickler about how much I'll pay for laundry soap.  I started grating the bar soap in my food processor upstairs, but mixing everything together downstairs because the dust from the powders lingered and really bothered me.  I couldn't breathe.  After doing some research, I found out the dust from Borax is toxic.  Lovely.  No wonder I couldn't breathe. I follow Bonnie's blog and kept reading about Shaklee products.  Actually, I think I was really stalking her blog! After asking her a million questions about the products, doing my own research, and cleaning my oven with oven cleaner (which I will NEVER do again), I'm now a Shaklee customer.  No more mixing my own stuff and not being able to breathe.  I absolutely love their stuff.  I'll be writing more in another post.

6.  Jeremy and I have been going on regular date nights. It's been heavenly.  We've been trying to think outside the box instead of going to the same restaurants or just going to a movie.  Last night we ventured to one of those restaurants where its changed hands and names a billion times in the last few years...the food was great and the atmosphere was perfect.

7. Is there any produce that is grown in the USA?!! I overheard a conversation the other day that tomatoes in the stores are picked green, then sprayed with CO2 to artifically ripen them.  EWW.  I don't know if thats totally true, but  it was enough to totally gross me out and make me hate buying produce from the store even more.  Spring is coming...with summer following and that means farmer's markets.  And maybe the CSA I mentioned in my last post.  I don't know about you, but I think grapes from Chile taste gross.

8. AJ signed "bath" so beautifully to me on Wednesday night that I cried.  There seems to be a correlation between motoring him through the motions while teaching him signs that really connects things for him.

9. I'm staring at a package of Pampers sitting here on the counter (no we aren't announcing anything, they are part of a gift) and its making me realize two things: AJ truly is no longer a baby and reminding me of how much I love that stage in life and wish another baby was in our future.

10. This past week was the one year anniversary of my Gram's death.  I really have no idea how its been a year already.  We honored her memory by having dinner with my family and telling stories.  Some our own, and some of Gram's.  I found myself at the best bakery in town yesterday.  I'm not sure why, I just ended up there.  She'd always insist on stopping there after her dental appointments.  Which totally makes sense, right?! It was just across the street you know. She'd be super excited to know they put a new location 10 minutes from her house.  Their apple turnovers are "The Best", she'd say.  Since it was evening, they were out of almost everything already.  Including Gram's beloved apple turnovers.  But, thats ok.  I got ham and rolls instead and walked out with fond memories of my Gram.
Posted by AJ's Mom at 10:55 AM