~Last week Monday we had our telephone court hearing regarding the denial of physical and speech & feeding therapies for AJ.  Our primary insurance stopped paying for these therapies eeons ago, stating it was just maintenance therapy.  I'm still not sure how any therapy with a child, much less a 5 year old, can be considered maintenance. Anyway, knowing our state insurance was covering these therapies was a huge blessing.  Even though they've denied before, we've appealed, and luckily we were given sessions before the hearing date.  Appeal dropped.

But this time, they weren't budging.  I spoke briefly to AJ's therapists, and went in a bit more nervous than I thought I should be.  I took the pages upon pages of each denial letter, grabbed a highlighter and pen and picked them apart.  I rehearsed as much as I could (other drivers on my route to and from AJ's school probably think I am the weirdest person alive talking to myself).The judge called and clarified this hearing was for two therapies.  Yes.  We started with PT, where I went on and on about how he needs it, and although I try my hardest, I am indeed, not a professional physical therapist.  Mind you, the judge states she did not have a copy of the physical therapy denial letter in his file.  Well, that's nice.

We moved on to speech and feeding.  Now that I think about it, I don't think I touched on feeding nearly enough.  I was stuck in the speech rut.  Especially since this goes back to when AJ first arrived home.  All in all the conversation, er rather me blabbering on for 45 minutes.

In the end, I am told that the petition AKA decision will be given by mid-September.  Well, that complete defeats the entire purpose of the hearing.  AJ was denied services at a very, very crucial time.  The plan was to prepare him for the upcoming school year.  The tentative plan is for AJ to attend kindergarten till early afternoon each day, every day.  There is no way he will be able to function for multiple therapies per week after school.

Instead, he has regressed. He is tripping and falling constantly, the tightness in his leg has traveled back up to his arm and shoulder again.  His UCB (orthotic foot inserts) are too small, so in addition to getting him in for the night splint, he now needs new UCB's.  When calling to make the appointment, I learned his orthotist is out on medical leave (you learn quickly not to go to just anyone to fit your child for orthotics).  The soonest we could get in is mid-August, which means we'll be lucky if we have orthotics by September.   Anyone want to know what his leg/foot/arm/shoulder are going to look like if we wait that long?  I don't.

In the meantime, I got creative and used my hairdryer to heat the plastic of his UCB and then stretched it out.  They use this process at the orthotic office, so I thought my ghetto attempt might work, minus the industrial heater and professional tools and, er gloves (OUCH!) they use.  It worked.  And I'll keep doing it until we get new ones. 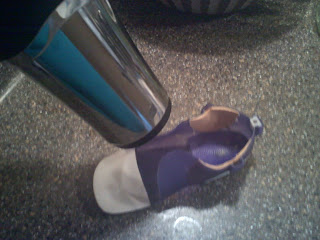 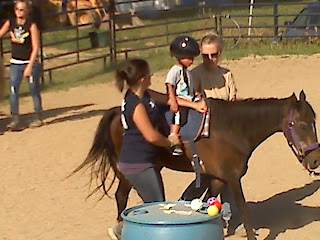