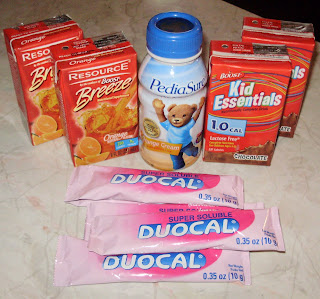 Yesterday was a very scary day.

As I stood next to the scale AJ was on, with my camera ready, sure that he was at least 20lbs even, my heart sank, shock set in, and fear consumed me.

His GI doctor is very, very concerned. Last October, he created AJ his own personal growth chart (since he's nowhere near the US growth charts). He was at 86% for his weight vs. height. The GI had said that meant he was slightly malnutritioned, but that it was ok, we were doing all we could, and that once he bumped up to 90%, he'd be happier.

It is EXTREMELY scary when your child's doctor can't tell you what is going on and how to fix it. He ordered blood tests and said that we need to basically cut healthy foods out of his diet. Concentrate only calorie rich foods ONLY. We can give him a slice or two of banana, but not a whole one. Food that are hard to "beef up" with calories are out. We are expecting the blood test results today or tomorrow.

There are a "bazillion" reasons as to why this is happening (the GI's words not mine). We are basically on a fishing expedition to see why he's not gaining weight. He has already been tested for parasites, celiac disease, and abnormal calorie absorption (negative). The hardest part for our GI is not knowing when he was born. We were told 4-6 weeks early. After a few months at home and many specialist appointments, its estimated more like 8-10 weeks early. We will never know. We know that he is burning an insane amount of calories since he has CP and is so mobile now, but this kiddo eats A LOT of food when he eats. Where's it all going?

We have a weight check in 2 months. If he does not gain, he wants to put an NG tube down his nose to administer additional calories. Depending on the blood tests results, he may scope him (do an upper GI).

AJ's nutritionist came in. Based on her calculations AJ is receiving proper nutrients. She recommended getting a pestle & mortar or a pill crusher to dissolve AJ's complete vitamins into a finer powder than what I can achieve with a butter knife. Jeremy brought home a pill crusher from work last night. Note: Those gummy vitamins they sell for kids now ARE NOT the same as the regular vitamins. The Flinestones (or generic brand) are COMPLETE, the gummies are not.

I asked the nutritionist about foods rich in fiber and that will keep AJ regular. The reason I give him the fruits/veggies etc is mostly to keep him regular. When you are pumping a kid full of calories, some of it can stop them up. We went through a few types of foods and she gave me ideas as to how to "beef" them up with calories. She gave me a few handout on blended foods, high-calorie puddings, and a milk + _______ calorie chart. She also sent us home with a bag of samples. We have Duocal, which is calories in a powdered form. we can use this or oil (as we have been) to beef up foods with calories. She also gave us some different types of high-calories/nutritious drinks for kids (actually made by the maker's of Boost products) and some new flavors of our good 'ol favorite...PEDIASURE.

We left the office and headed down to the lab for AJ's bloodwork. 45 minutes later, I left with a very crabby, hungry little boy.

This morning he ate beautifully at feeding therapy. He chugged, and I mean chugged down the "Banana Cream" Pediasure. I forgot how that stuff smells-ick. But he liked it, so my issues with its smell are null and void. I had to look at my calendar...AJ's been "off" pediasure for over a year now. We had gone to the cheaper alternative (pediasure= $12 for 6 bottles...he was drinking 4/day) Carnation Instant Breakfast with whole milk. He liked the banana cream, he had the vanilla for lunch and has an orange cream to try as well. Whatever WORKS.

His SLP brought up something interesting regarding the NG tube. AJ is such a sensory kid, good luck keeping that in his nose and throat. Will it make him take a step backwards in sensory world? Her other fear is that he will develop an aversion to the tube, and due to that, will develop more aversions to other things. Ugh! I hadn't thought of that. We and his SLP decided that we would cut back his feeding therapy to twice a month...and switch days to accomodate him particpating in the toddler group (more info in a different post). Looks like we made that decision at the right time. Finding an even balance between gaining weight for GI, continuous movement for PT, and trying new foods/biting for feeding therapy feels impossible.

We're a bit calmer today. Maybe its just that he ate well today. His nutritionist did ask me for a recipe that was Jeremy's Grandma's. She had no idea what "Russian Fluff" was when she saw it on AJ's food log. When I shared the ingredients with her, she asked for the recipe, hoping to share it with other families who are looking for "meal" ideas that have bold flavor and lots of calories. I think thats a neat way of Grandma Schmidt feeding other kiddos, in spirit :) I'm hoping to get Uncle Jason over here soon to help convert our hall coat closet into a pantry with shelves etc. I keep AJ's special foods/snacks/supplies in one section of our cabinets. That worked well when he was a baby and ate baby food. Not so much now. Note for the next house: pantry.
Posted by AJ's Mom at 3:03 PM