Do you have a surgery date?
No. Go fish.

After talking with AJ's audi today, I was informed that the surgery scheduler is out of the office today. Fantastic. Insert, another oh so fabulous "You've GOT to be kidding me." We won't know AJ's surgery date until after the weekend.

I was also informed that usually it takes about a week after insurance authorization to schedule surgery. Well, whada ya know. That would have been nice to know months ago. We just kept hearing the surgery scheduler will call you once he's been approved. If I had known it would take I week, I wouldn't have been so quick to contact her and ask what in blazes was going on.

In other news...
AJ begins toddler group at the Center for the Deaf & Hard of Hearing on Monday. I haven't really had a chance to think about it with all his CI stuff going on. He'll be attending the toddler group Mondays and Wednesdays from 9-11:15am. We were able to successfully reschedule his OT and Feeding Therapy to allow for this opportunity. Parents are required to stay during the group and are "involved" at the beginning and end of group. We are so excited that he will have a chance to be around his peers. He needs this so badly. Perhaps I won't feel so guilty then that he never has a chance to play with other kiddos. When you've got a schedule as full as his, there doesn't leave time for much else. I will be sure to post pictures of our little man "at school" next week.

Thank you to everyone for all of your prayers and concern. While all of this hoopla has been going on with AJ's CIs, my grandma has been in the hospital. It has been a stressful time for all of us. She is doing well and will be moved to a rehab facility for a week on Monday. She is sad that we are not able to bring AJ to the hospital, but she gets her daily dose of AJ updates and has his picture displayed proudly on her bedside table.

We've got a busy weekend ahead of us, so I thought I'd post some recent pictures of AJ now...enjoy!

Hard at work pulling pegs out during OT 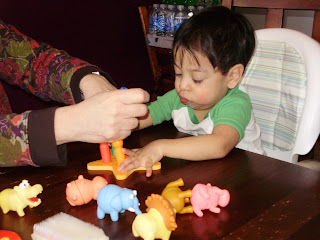 Who needs toys when you've got an oatmeal container & shower curtain? 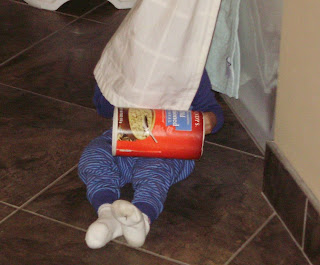 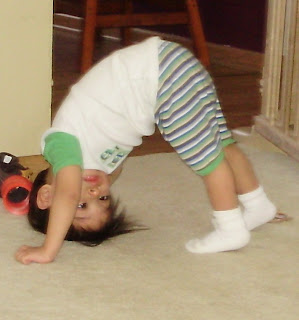 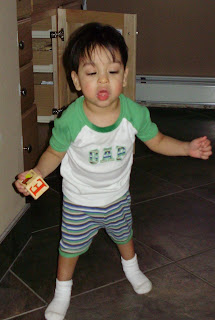