AJ attended his first day of toddler group at the Center for the Deaf and Hard of Hearing yesterday. He did exceptionally well, much better than we and his TOD expected.

The day begins with parents & the toddlers (on carpet squares) sitting on the floor. the theme for this month is "Emotions & Things We Do". Each child has a polaroid picture. A language exercise is done with the photos. The teacher shares what they will be doing that day. A "Its Time to Play" song is sung/signed along with a "Bye Mommmy/Daddy/Whoever brought you today" song. The parents leave and campout out in the observation room. There are two windows for us to view the playroom...they are mirrors on the playroom side.

A structured play activity was first. They made playdough. AJ was pretty much bored until his turn to help came around. Then came a free play time. Which has become his favorite part :) Next came circle time, where the kids gathered on the carpet squares again and the teacher told a story. She used a large book (seperate sheets, not bound) and props to tell the story of Goldilocks and the Three Bears.

After storytime, the kids had a snack. AJ did well with snack. He got a bit irritated when everyone had food except him. They use snack time as a language opportunity as well. He "asked" for food by whining and arching his back. I knew what it meant. :/ At least he knew what the objective was at the table...and he quieted as soon as he had crackers in front of him.

After snack, the kids enjoy another free play time. The lights are flashed and a clean-up song is sung while the kids clean up the toys. They gather on the carpet squares again and talk about what they did for the day. An individual "Bye Bye" song is sung for each child (see title of this post). When the group sings the word "Go", the parent has to ring the doorbell outside the playroom, enter, and exit with their child.

In addition to the teacher, there are three SLP's present (speech language pathologists) along with a grad student who is fulfilling her internship.

I am SO GLAD we have AJ in this group. It is such a fun, interesting mix of toddlers. They all have different personalities and different ways of expressing themselves. There is one hearing peer, one CODA (Child Of a Deaf Adult) who is hearing, and 5 other kiddos, including AJ, who are Deaf/HOH.

AJ has had very little exposure to other kiddos. Yes he was in an orphange, but since we know he pretty much laid on the carpet away from the other "active" kiddos in his play area, yeah. That equals no exposure. While he desperately needed the one-on-one when he came home from the orphange and needed to bond with us, he now needs to function as a kid-with other kiddos. I was happy to hear the teacher's report of a moment between AJ and another little boy in the group during free play. He was talking and smiling at AJ...AJ turned to him, made eye contact, smiled and giggled. We're getting somewhere! This little boy took particular interest in AJ and was sort of his "Mother Hen"-it was very cute.

What did Mommy learn from observing, etc.? Several things:

-I need to brush up on signs and pursue taking the ASL 1 & 2 courses sooner than later. We had two deaf parents and I felt like a fool not being able-ok feeling inadequate-to sign to them and carry on a conversation. I am so used to using my first language English, that when I was tapped on the shoulder and asked through ASL if AJ would eat the snack, I responded with "Uh huh" instead of signing "yes".

-We NEED to sign with AJ a whole lot more. Enough said.

-We need to do more structured activities/play with him.

-We need to continue praying for WARMER WEATHER so that we can get out of the house and expose him to more things, making EVERYTHING a language opportunity.

The staff did an awesome job with him. I was afraid they would "give in" to his whining and actions (we've had that happen before elsewhere). Instead, they redirected him if he was unhappy or bored. It felt "weird" to not be in there and doing it all. While I didnt feel like I "had" to be in there...I didn't know what to do with myself except keep watching through the window as my baby grew up right before my eyes. AJ had no problem being away from me :)

Later on that night I visited my Grandma in the hospital and apparently signed almost every word I spoke to her. As she said, "Whats with the hands goin' tonight, Heidi?" I just laughed and made a mental note that I should be doing this all the time.

AJ has group again tomorrow...we shall see how his second day goes! Below are some pictures. Please forgive the quality. I have an awesome "behind glass" feature on my camera, but I think because the window was a mirror on the other side, it caused the images to be distorted. Nevertheless, they are proof he's in school now!

With his teacher, noticing the lights were flashed as a sign that its
time to "Clean Up" 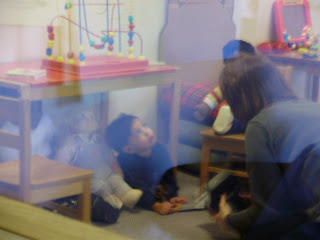 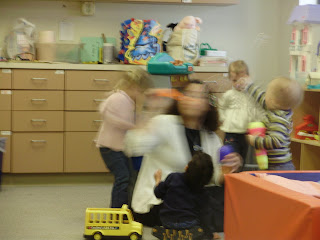