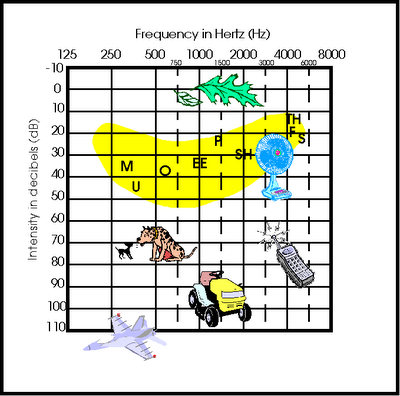 AJ had his 1 month CI follow-up last week. He had GREAT head turns and reactions to sound in the booth. He tested at 50db multiple times. YAY! He also stayed occupied on the ball and allowed testing to continue longer than usual.

When we were done testing, AJ's audi said she is confident AJ is hearing a bit better than 50db, more like 40-50db. That means he's definitely in the speech banana. WHAAHHHOOOO! Because of his subtle reaction to softer/new sounds, she was pretty sure he was hearing them but not aknowledging the sounds.

His audi gave us a set of new programs to try with AJ, making our last program the first of this series (P4 is now P1-make sense?). But she started him on P2. She placed his CI back on him and did her usual "Lets make sure its not too loud for him" test. Now last time she did this, he turned to her voice immediately. This time, no reaction to her voice, clapping, banging on cabinet...he finally looked up to the shaking of a plastic container with blocks in it. Hm, we decided he was pooped out from the booth.

His audi took his CI off to do some equipment testing and we allowed AJ to play on the floor, in silence, for about 5 minutes. She placed the CI back on him and spoke to him in a normal voice. He cried. Stinker. We turned his volume down a bit and he was just fine for the rest of the visit...and the day. He was definitely tuning us out right after the booth testing.

His audi set another appointment in a month (instead of the typical 2 months) so she can keep a close eye on him and adjust his MAP accordingly. Works for us. AJ is now hearing things he's never heard before. We are way past the level at which he was detecting sound with his HAs. He's figured out how to tune us out (yep, takes off coil), but is fine when we put it back on. His form of "protest", if you can call it that, is giggling, smiling, and squeezing his head to his shoulder. Ridiculously cute and hard to keep a straight face while replacing his coil.

A special thanks to my wonderful hubby for diligently "testing" AJ via environmental sounds each night when he came home from work. AJ's head turns in the booth were absolutely beautiful. She was floored with his new skills! Way to go hon!!!

He followed his CI appt with speech the next day. Again, great turns while just working in his SLP's office. And, lots and lots of vocalizations. He continues to vocalize-all the time. Now that he's in the banana, Lings here we come!