It's early, so I thought I'd take the time to blog. The new layout and music is my attempt at pretending I'm at the spa....

It has been nothing short of crazy around here. We have been lucky enough this past week to have Haley here. She is extended family, and had a break between her spring and summer courses at college. We asked her to come for the week to help with AJ while we attempted to get the house ready for sale.

We seriously don't want her to leave! It is so beyond wonderful to have an extra set of hands when it comes to AJ. Naturally, I feel like we could have gotten more done. But I tried to keep reminding myself that not everything was going to get done in just one week. We were able to take all of the kitchen cabinet doors/hardware off, pack up most of the kitchen (items not being readily used), prime some walls, and paint a few of the closets. Not to mention to some other smaller tasks. Our goal is to list the house by July 1st.

Haley is a complete natural when it comes to AJ. If you ask me, she should be an SLP. She knows exactly how to reinforce AJ's vocalizations, and quickly learned the ins and outs of language during feeding time & play time. She accompanied us to speech and participated in PT and his TOD's sessions yesterday. No doubt I will thank her a thousand times before I take her to the train station tomorrow morning. (Not like we haven't been since she got here)

AJ absolutely loves Haley. He's actually learned the skill/concept of doing something and looking for your reaction. He especially loves to do this when Haley and I are sitting on opposite sides of him. Hm, which one can I get to laugh?

AJ has done well this past week. On Tuesday we completed our last observation by the school district staff and then had speech. I was happy that AJ continued his vocalizations and showed off to his SLP. We turned him up to his next program during speech.

On Wednesday he had toddler group, which went well. They watercolored rocks-which was super cute. He had a bit more interaction at table time. He did not fair well at the end of group when they brought in a large drum that was on a pedestal and had wheels (looked like a table). The concept was rain/thunder/pitter-patter and lets just say that between the low/loud drum, the teachers loud voices, the kids screaming, and his new program, it was too loud and he freaked out. We turned down the volume on his processor, but by then I could tell he was overstimulated and was not going to calm down. He passed out in the car five minutes into our ride home.

Yesterday he didn't do much for PT. She was able to do some Craniosacral work and get some length into his legs. He is not super tight, which is GOOD, but he was a bit stiff, so we need to keep a close eye on him. He's probably starting to grow again. We are back to doing the massages, foot wiggle, and joint compressions. We are doing what we can to avoid botox. He does not need it now, and if we keep him elongated and loose, he may never need it. His PT said he technically "should" be tighter than he is, but we're so good (her words not mine) at keeping on top of his tone that this has not happened. And we intend to keep it that way. We also discussed a big boy bed (twin), which she had brought up a few weeks ago and I was panicking about. Why? Because he's so short. All I can visualize is him falling out of bed at night onto the wood floor. He should be in a big boy bed in the next year...so that made me feel better. While he can scoot off of our bed, I still don't think he can do it safely. We also decided that AJ will be getting AFO's to replace his SMO's for his feet. I'm sort of disappointed, but I know he needs them.

All in all his PT is pleased with AJ's choosing to walk over crawling and his squat/up from the floor skills. I am still on the hunt for a second stepstool for the tub. AJ is able to step on his potty chair (also a stepstool when the lid is down) into the tub, but we have a rather deep tub, so his PT suggested putting another stepstool inside the tub. I'm also looking for a 2-step stool to help him in and out of the car. He is using the Mommy factor way to much as far as getting in and out of the car. So I thought that using s step stool to step up into and down from the car would give him more motivation. They don't make a whole lot of them that don't have that darn safety bar in the front. I also ordered a wedge for AJ to sit on. It is inflatable, and helps kick in his trunk muscles and give him stability. We have started using it in speech therapy and will use it in toddler group as well. Here is a picture: 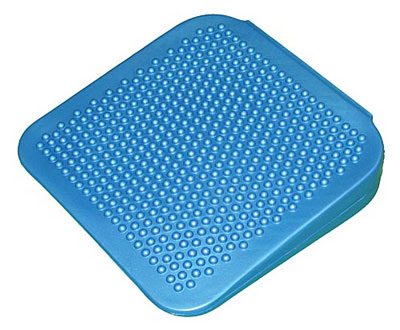 He did "ok" for his TOD yesterday, he didn't seem too interested and I think he was already pooped out from PT. This week we are focusing on two of the Learning to Listen objects/sounds, one long, one short. He is also responding to 5 of the 6 Ling Sounds. YAY!

Today he has nothing. No appointments... only because I have an appointment for myself today. We plan on making it a fun play day for AJ. I am bummed he can't play in the sandbox yet (sand & eye surgery don't mix), but maybe we'll go to the park instead.

It has been a challenge trying to fit all of AJ's appointments into each day. There seriously are not enough hours. Add in everyone's schedule's changing for summer and you've got quite the mess. He's really been a trooper, but still I wish we could have more days of nothing than days of major overload. I'm kinda over it. We are at a point where all of his services are critical, and frankly, there are many pre-linguistic skills that he needs to learn yet. Hopefully before school starts. We can't stop just because I'm tired and exhausted. Not the way it works. This is not about me, or anyone else, its about AJ and what he needs. I find myself becoming upset with AJ's delays. Not at AJ, but at the fact that I wish he didn't have so much catching up to do. I want him to receive the maximum benefit from being in school, in the awesome program we are fighting so hard to get him into.

We have been struggling with deciding on a communication option for AJ. What seemed right before he had access to sound...may not be right now that he has access to sound. We continue to discuss and go around in circles about it. I agree with Jen, the IEP process is for the birds. AJ's IEP meeting is on Wednesday. Everyone (on our side) keeps assuring us that it will be fine, AJ will go to Lowell. But I am holding my breath until the end of that meeting, when we hope to hear the words "Placement for the 2009-2010 school year will be Lowell." I will be dropping off our parent packet to everyone attending his IEP early next week. It baffles me that these people are supposed to decide my child's future for the next year, and most of them don't have a background on him. Hello? He's more than a piece of paper. He's a child and more importantly, he's our son. Bring on the school supply lists and weekly language goals. Those are so much more fun.

We're over it. All of it. Where is that damn genie in the lamp when you need him? Regardless, we know we can't stop, as this is a critical time for AJ. He's doing well, and not showing signs of hating us (yet). We are so very proud of him and love that we get to watch him grow and progress every day. He's vocalizing like crazy with different variations and intonations. Somehow we need to keep everything in perspective and keep working on the house, his school placement, and his everyday schedule....
Posted by AJ's Mom at 7:36 AM