When Mom and I arrived home, I went into full nesting mode. I must have packed and repacked AJ's suitcase a hundred times.

July 10th, 2007 Received word the adoption decree had been recorded and AJ now had a passport

July 13th, 2007 Recieved word we were submitted to the US Embassy on July 11th

This time around we chose to work with a fantastic travel agency, specializing in adoption travel to Central America. Are we glad we did! Since our Embassy appointment was on a Monday, we had to take custody of AJ by the Friday before, which made our travel plans quite challenging.

We flew out of Milwaukee on Wednesday, July 25th. We arrived in Guatemala around 11pm that night. In the "travel guide" you are given as prospective adoptive parents, they discourage you from flying in late at night. Well, when you have 4 days between when you receive PINK and fly out, you take what you can get. Another "suggestion" is not to take the taxi cabs outside the arrival area at the airport. Well, our regular taxi driver never showed. We took a wrong turn somewhere off the main street our hotel is located on. I'm still not sure how I figured this out, but I realized we were going in the wrong direction.

Soon we were driving down this dark, and I mean dark, alley. Um, where are we going?!!! I tried to quickly gather my spanish vocabulary and managed to say, "No, no. Casa Grande. Estados Unidos Embajo....(think of a directional word)....derecho!" The cab drivers understanding of English was very limited. He had thought I had said "Casa Viaje". Um, NO!

We made it to our hotel and I've never been so happy to see that place. It was the first and only time we ever felt scared in Guatemala. (Ok the anti-Bush protest right next to our hotel (in front of the US Embassy) that we drove through as we left from our first visit was a little scary). We tried to settle in. When we arrived a bag was waiting for us at the front desk from another adoptive Dad. We were picking up our boys at the same time. He had brought down their half of the gifts we were putting together for the orphange staff. I sat down and started stuffing the bags. We made little "bath/body" bags for each of the nineras (caregivers) and slipped in a handmade card that said thank you from "AJ and Adrian's Families". It was a great way to decompress after our not so fun "tour" of the city. 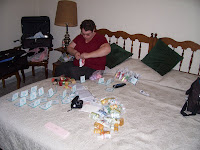 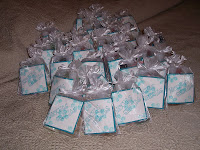 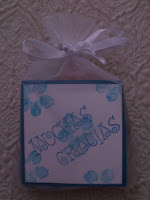 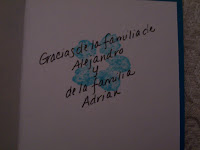 We were excited for tomorrow to come get ready for our tour of Antigua the following day. Adoptive parents are encouraged not to tour/go out of the hotels with their children. So, we thought before we get AJ on Friday, lets do a day tour of Antigua. We are so glad we did!
Posted by AJ's Mom at 9:29 AM