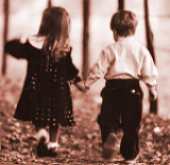 Yesterday morning we arrived at school just in the knick of time. All of the girls were sitting on the bench. When we walked in they all *gasped* and said, "AAAAJJJJJ!"

Oh Lordy. I think I'm in major trouble! Their gasp was like when you see a little girl at Disney World...as she spots Cinderella in the distance, she turns to her Mom and says, *Gasp-Breathe-Gasp* "Mommy! It's Cinderella!" It was too cute for words. He did receive the same greeting this morning, although with a little less enthusiasm.

He has already held hands with the girls, which they initiate, let me just say. I've heard from his teacher that a few of them have really taken to helping him in class. This morning, my heart just melted. One of the girls came over and put his CI coil back on his head when it fell off. When it was time to line up, she came over to me to take his hand and walk to the classroom. I think its the eyelashes!

The only thing-AJ isn't so smitten with his classmates. Any of them.

We've been so blessed to have daily contact with AJ's teacher. Last week he struggled at a water-based activity with "sharing" his space with another child. It lead to tears. He was given a break and then redirected to the water table again and he was still frustrated with sharing his space.

I really dislike this (my lame Ode to Facebook). His lack of socialization is now beginning to scare me. Will he ever get there? I'm also feeling a mega load of guilt. While other kids are playing at the waterpark and eating popsicles, my kid is enduring long drives with hours and hours of therapy and doctors appointments.

When he came home, we knew he needed to bond to us. That's all that was drilled into our heads. Don't let others hold him. Then it was don't let them meet his needs-you only. Oiy. What we didn't know was how behind he was. We thought we as parents would miss a lot, adopting him at 13 months. In a way, God blessed us, as AJ came home at a newborn level. We were able to give him his first solid foods, his first real bath in a bathtub. We saw him crawl and saw him WALK. We saw him HEAR for the first time. However, I don't think it benefited AJ coming home with a history of 13-months of NOTHING. We immediately got him into intense therapy and began his awesome adventure.

There wasn't much time for playdates. And the few playdates I went to, I ended up bawling all the way home. If ever there was a place I didn't feel comfortable and had the reality of AJ's delays and differences in front of me. This was it. And no one was making me feel that way, its just the way I felt given the situation. I spent more time calming AJ, working through his sensory issues, feeding him, and explaining why he was doing "this this and this" to the other parents while everyone else's child was running around in circles, feeding themself and asking for more milk. AJ just "didn't get it", and soon they become unimportant. PT, OT, Speech, Feeding, and his TOD visits were definitely the priority.

Some people have assumed that AJ was used to being around other children since he was in a orphange. We thought so too, at first, but now know he was either held or just layed on the carpet, next to the other children who were more mobile and placed on the foam squares in the play area. Why? Because he was so small and immobile. While I'm thankful they thought about his safety (some of those kids were chunk-a-monks), the other part of me burns with anger knowing his only "friends" were Sylvia, his caregiver, his hand (which he starred at-and still does occassionally), and small rattles. And, if he couldn't hear...yeah. He had no clue those other kids existed.

I'm feeling guilty that he hasn't been around kids more. While I know a part of it is his developmental level, it still bothers me. I'm slightly jealous of those Momma's who live on streets/in neighborhoods that have families and kiddos galore. We live on a country road where we are one of two families that are third-generation. It makes me angry and very sad that we know his brother is in Guatemala and there isn't a damn thing we can do about it. We've TRIED. We would love for AJ to have a sibling or siblings. It makes me angry that adoption is so freakin' expensive. It makes me angry that our experience has made us very leary of opening our hearts again and trusting those in the adoption industry. It makes me angry that politics have essentially shut-down international adoptions. It makes me sad and angry that we can't just say, "Let's have another child." It is simply....Not. That. Simple.

I had another chat with AJ's teacher after school today, which calmed me down a bit. It seems he did well with his peers on the playground today. Per his teacher's suggestion, I am going to make an appointment with his Developmental Specialist, whom we haven't seen in quite some time. He may have some ideas as to how we can help AJ become a social butterfly, well, at least be social. He has not seen AJ in a year and I remember him saying, "Let's do the implant, give him some time, and see where he's at." I think he'll be pleasantly surprised. We are all working together to form the best program for AJ.

My new goals are to schedule a playdate for him at least once a week, focus on the good "peer-interaction" days he has and to take the bad in stride, and to give him more opportunities outside of school (other than PT and OT!).