About 2 weeks ago we said goodbye to AJ's SLP (Speech Language Pathologist). It was a rather unexpected, as we thought we would continue seeing her until mid-October.

When AJ's CI was activated, we began focusing on auditory/speech/language, checking in on his feeding skills here and there. He seemed to be doing just fine. We knew we would not continue with speech/feeding at CHW once AJ began school, as he receives speech during his school day, and heaven forbid we commit "duplication of services". Since we had visits covered for after AJ began school, his SLP tapped into his feeding therapy a bit more. That way, we could finish our covered visits and not waste them. It sort of reminds me of that roll-over minutes commercial with the Mom and Son. Cracks me up everytime I watch it.

During our last session, I found myself doing a lot of reflection. He was happy as a lark sitting and eating his peaches while I was remembering how long it used to take him to get used to the room, how we'd have to tag-team him to do therapy on the yoga ball, how he wouldn't let her touch his mouth...the list goes on and on. There he sat giving her fantastic eye contact, asking for more by signing the word multiples times, eating with a spoon, drinking from his cup. He has come a long way from when we started therapy. From not being able to hold his own bottle, having major oral sensory issues, not being able to hear or communicate, to this smiley little boy who charms his SLP to no end, who walks rapidly down the hall to "the door" where she comes out and gets upset if the door opens and she's not there yet, letting her in his mouth, who bit into and chewed a cookie for her, to sitting at the table for the entire session and doing activities, who tapped her hand for attention or something he wanted, to turning to her when she does the Ling sounds. It has been quite the journey.

So from here, Mommy becomes his feeding therapist. We can always return if we have an issue that comes up. We will still see Dione every few months, since she assists with his CI mappings!! Below are some pictures, unfortunately a lot of my good shots were taken with my previous cell phone, which blacked out a few months ago...meaning I lost them all. So, you may see just part of Dione in some of them.

Thank you Dione for everything you've done for our little man! We'll see you soon!! 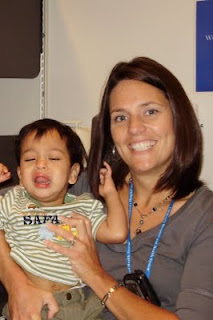 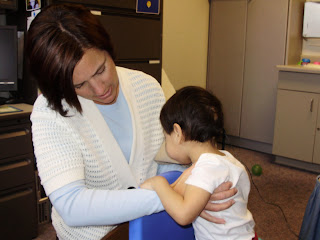 AJ looking up at Dione during CI Activation (I love this picture!) 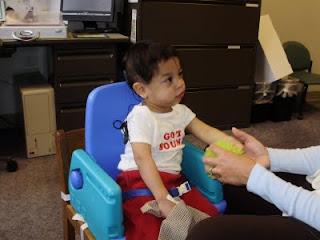 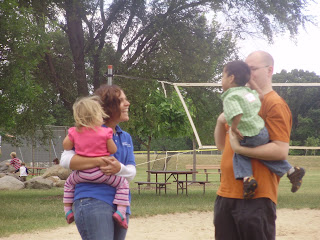 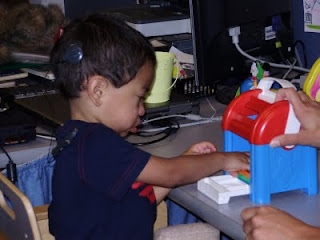 AJ and Dione during his last speech session-September 2009 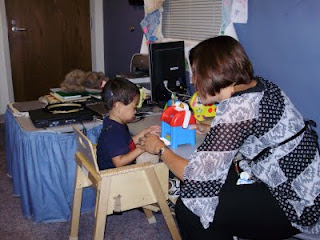