I just felt someone punch me in the stomach.  Not really, but the wind was certainly knocked out from under me as I realized AJ's next IEP meeting will be in 2 months.

How did I not realize this until just now?  I'm not really quite sure.  Maybe because my brain subconsciously thought the meeting would be around his birthday again.  Which makes absolutely no sense.  The school year ends in early June.  Which means his IEP will be in late May.  I'm sure it will happen before the end of the school year.  This is exactly what we wanted to avoid.  It would take a sheer miracle, with several layers of wonderfulness, to have us in Waukesha by May.  We will be considering next year's placement, including ESY (Extended School Year) for the summer, and what to do when he's not in the month-long ESY program.  We will need to discuss PT, OT, speech, and on, and on, and on.

Over the winter {this is my bold attempt to use past tense yet again}, I stayed in the Waukesha area while AJ was at school.  Many days I'd drive around different neighborhoods, write down MLS# from for sale signs, pick AJ up, and head home.  We are nervous about what we are going to find in the price range we are hoping for.  We aren't shooting for extravagant or huge.  No stainless steel appliances or updated flooring.  We're really looking for square footage, in regards to having a space for AJ's therapy/play area.  From what we've seen, slim pickin's my friend.

Our financial situation {living on one income} is not about to change anytime soon.  And you know, that sucks. AJ's needs continue to increase, which is something we must take into consideration.  We are unable to rent, due to our pets.  We struggle to find the time to finish what needs to be done to our current home.  This is...a lot to think about it.  I am, frankly, tired of telling people we are going to move, with different dates in the "fill in the blank area".   We are really freaking out stressed about this whole situation.

In other news:
We were finally able to order AJ's glasses.  They will take a few weeks to come in.  For those in state of WI, Medicaid/T19 will not pay for the frames, only the lenses.  Nice to find that out when I went in to order them.  I made a quick call to his ophthalmologists office to update them on Medicaid/T19's payment for glasses, as they told me the whole thing would be covered.  I'll be the guinea pig, if it means some other young Mom & Dad don't have to go into an optical store and be asked for cash on the spot.   Remember I said he loves glasses?  Nope.  He hated trying on the frames (no lenses).  Lovely.

AJ's evaluation with Rona Alexander went well.  It was amazing to see her treat firsthand. She may see him again the next time she consults at his therapy clinic.  YAY. I videoed the entire session into four separate videos.  Wouldn't you know my camera decides to not cooperate.  I am unable to transfer any of the videos to the computer, and when I play them back on the camera, I can only view 2.  AJ's PT had asked me to video for her benefit, for AJ's OT, as well as his new SLP.  I also wanted to share it with AJ's teacher and therapy staff at school.  What is with me and cameras?  I will say that this happened twice already, when we attempted to video AJ during treatments by another world renowned therapist (PT).

I am anxiously awaiting Rona's report.  I am not anxiously awaiting the bill after our primary pays.  She is so totally worth it, but gulp.  I feel like things are constant piling on top of us.  We are also waiting on the go-ahead from T19 for AJ's speech/feeding therapy.  Once we get that, he can begin therapy.

The same day AJ saw Rona, we had my Gram's internment.  Stressful day.  I had wanted a sitter for the dinner after, which didn't happen.  AJ did well up to the dinner, but when you walk into a nice bistro with a almost 4 year old that just had one of the most intense therapy sessions of his life and no nap, you worry.  A lot.
I miss Gram.  I find myself thinking of calling her to tell her something.  I don't actually pick up the phone or anything like that, I just think about it.  And then I remember she already "knows".  That, to me, is pretty cool.

AJ was "verbally" approved for another year of Medicaid/T19 through the Katie Beckett Program.  We had our every-other-year home visit from the KB rep last week.  While I shouldn't be nervous, I usually am, since it is such a blessing to have this secondary insurance.  I think I am also nervous due to her telling me he didn't qualify when I called her on the phone and told her his diagnoses way back when.  Thank God his PT told me to schedule a home visit so this rep could see him in person.

I straight-out asked if there would ever be a time where AJ didn't qualify.  She answered, "Unless he has some miraculous recovery and catches up to his peers in every area, I don't think you have anything to worry about."  Comforting and tremendously heartbreaking at the same time.  I will also say that if anyone thinks we are "milking" the system, or that this is the easy route, you are seriously mistaken.  I plowed through two ink cartridges and handed her over 125 sheets of paper-copies of his IEP, IEP update, recent progress reports from his therapies, and their handy dandy stack of paperwork.  Totally worth it, but not easy street. 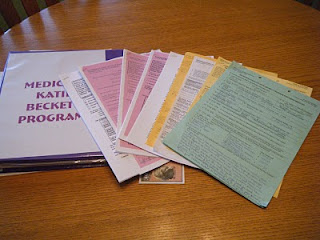 And, I watched a hoarding show tonight.
Talk about having the sudden impulse
to completely empty my entire house.
Gives me the heebie jeebies.
Posted by AJ's Mom at 10:56 PM