Its the Most Emotional Time...Of The Year

This time of year is always rough for Jer and I.  We don't even need to talk about it, we both know how the other is feeling....  This year is no exception.

The beginning of November marked 10 years since Jer's Dad passed.  I'm not sure how that much time has lapsed.  I do know that I am blessed to have a part of him in my life every day...as Jer has his Dad's personality to a "T".  He makes me laugh, even when I don't wanna laugh.  He reminds me not to take all things in life so seriously and that its ok to "piss on it" once in a while.  As I just re-read the last sentence, I realize that you'd have to know Jer or his Dad to really get that sentence and see the humor in it.

This time of year makes me think of all of those things...especially the people we've lost.

Gram had this insane obession with an appetizer I make...bacon-wrapped waterchestnuts.  While she always called it rumaki (which is really bacon-wrapped shrimp), I never corrected her.  She always looked forward to them and it was always the first thing on her appy plate.  Finding whole waterchestnuts this time of year is always a challenge, but I'd go to 4 different stores to get them because I knew she loved them.  I saw a bottle of chili sauce at the store today (an ingredient for this appy) and felt a deep sadness.


{I've shared the recipe for Bacon-Wrapped Waterchestnuts below}
Gram always insisted on yams, not sweet potatoes.  There is a difference, she'd say. She taught me how to make them her way...and after that, it became my job to make them.  She'd laugh at my commentary when I clean and prep a turkey ("Eww", "Gross", "Ahhh!"-when its slippery), "Blech", to mention a few choice words).  She'd watch me closely as I made the cranberry jello mold.  She never did notice I made it with sugar-free jello.  Horrors! :)

She'd insist on a grandiose table setting, which always meant my Mom and I would be running around like chicken's with our heads cut off trying to make it just perfect.  Gram would always tell us girls what a good job we did.  That made it all worth it.  Her famous apple pie was always made the morning of Thankgiving (right, Mom?!) and I swear I 've never tasted a pie like it.  White Zinfandel (she'd call it ZinFondle) was a must, as was the green bean almondine.  No green bean casserole!

When Jeremy came into my life, and it was clear he was staying put, she was determined to make sure he had enough to eat.  It took quite a few years before I broke down and told her he doesn't like turkey all that much.  Dark meat if anything.  She took note and made sure Jer got his dark meat.

When AJ arrived, her Thankgiving meals were all about watching AJ.  What she ate became less and less, she focused her energy on watching AJ eat and entertain us all.  Nothing else mattered except AJ.

She'd be disappointed that I'm not hosting Thanksgiving this year.  It was a very difficult decision for me to make.  Although I do hope that in that disappointment, she'd understand why.  While I have no doubt this year's Thankgiving will be wonderful, it will be different.  I miss her every day and find it incredibly odd to talk about her in the past tense.

It is amazing to think of how well I knew her.  If she was here, she'd ask how AJ is doing on his seizure medication, she'd ask him "When are you going to talk?", and call him handsome a million times.  She'd be making sure I was prepping each meal her way and kindly enduring my constant chatter.  She'd have the conversation with my Mom about the silverware and asking if she could help in anyway, to which the both of us would kindly shout "No!"  She'd ask whether my book was finished.  She'd tell us where to go in Hawaii on our anniversary trip next year.  She'd tell stories of her island adventures...no doubt throwing in an embarrassing tale or two about me.

I will be forever grateful for the time I was given with Gram.  While she won't be joining us for Thankgiving this year, I'm sure she'll be having her favorite appy and a glass of Zinfondle.  Yep, I'm sure of it. 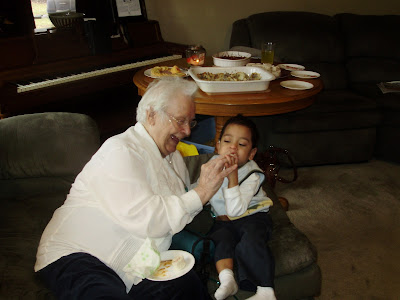