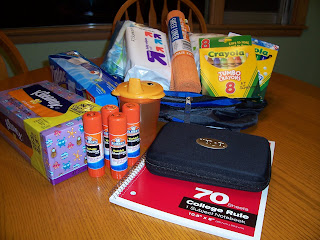 Last week Thursday was "Meet the Teacher" night at AJ's new school. It went better than we had expected. Not to say there weren't some minor bumps...:) There have to be some, otherwise this blog would be Booooooring.

Bump #1: The front the school is on a main street, so there is no parking in the front. The side lots are down the side hills and a steep and long walk. I pulled into one of the side lots and had to think if I was going to have AJ walk all the way or part way. I opted for part way, for safety and to help reserve his energy for the classroom. I carried him from the parking lot to the side of the building and put him down to walk. We were the slowest people on that sidewalk. Kids and their families would turn and look at us as we walked by. My guess is that most of them assumed he was a sibling. He was also the smallest child-kinda freaked me out. Not like I didn't already know, but the rest of the kids looked like giants as we walked into this new land. Anyhow, he made it from the side of the building, to the front entrance, down the hall to his classroom. He let his feet go and did his classic "hang like a monkey" (oh so NOT good for his muscles/CP). But I was uber proud that he made it in and down the hall. We greeted his teacher, Mrs. S, and AJ took off into the classroom without me. Alright then.

His teacher had mentioned she would ask the school PT, OT, and SLP to come that night so they could meet AJ and we could meet them. They were all there! We recognized the SLP-as she was there in January when we toured the school. I remember watching her do a speech session inside the soundbooth-in the classroom!

Bump #2: AJ took interest in the bathroom that connects the TC classroom from the AO classroom. Quite an interest. He wanted to play with the lego the OT gave in the stall. I don't think so! After many times of taking him out and saying/signing "NO", the SLP finally closed the door. And Meltdown #1 commenced. It wasn't horrible, but I felt myself sweating and becoming very nervous. Eventually he ended up in the middle of the classroom, just sitting with a few trains, and checking everything/everyone out. Many of the children came in hiding behind Mom or Dad and rubbing their eyes as if to hide. Too cute.

After about 10 minutes, AJ was up and at it again. In came Daddy, who had given himself a frustrating tour of Waukesha while trying to get to Lowell. AJ found the snack/circle time table which had all of the handouts on the table. Of course he wanted each piece of paper. We decided it was a better idea for him to color at the table. He colored like a champ; his teacher and the PT were impressed with his coloring skills.

The chairs they have at the table are just adorable. Mrs. S pointed out the Rifton chair that they have for AJ to use. I'm not so sure about it. The other children's chairs are similar, except the back/legs/seat do not adjust/angle. But, while he was coloring, we had him in one of the other chairs. Other than sliding down (which we use shelf liner on the bottom of his seats to prevent), he did great. They even had a block so he could rest his feet on something. This helps, not hinders. It helps him work less to sit up and do the task at hand. We'll have to see how this goes. The Rifton chair is the proper table height, but you can't push it in, so he's further away from the table. I noticed little laminated school themed cut-outs with the kids names on them. We looked at all but AJ's. We assumed his was on the Rifton. We'll save that for Tuesday.

While he was coloring, we gathered the handouts we didn't already have and spoke more with Mrs. S and his PT. When he was finished coloring, he took off with one of the pyramid crayons. Uh Oh. AJ quickly found the window to the soundbooth and thought it was a cool place to hang out and look at himself...and giggle. We met one of his classmates parents who were very nice. He even sat down to make a construction paper puppy (Dogs/Puppies are the first theme for the classroom)with Mrs. S. He has never, ever used Elmer's glue before. Got the hang of that right away, which impressed us. And he didn't have a problem sticking his fingers in it and getting all "peely" when it dried.

Bump #3: All was well until it was time to go and he had to put the playdoh down. Commence Meltdown #2. He was done. Cooked. Mad that he couldn't have what he wanted. Overstimulated, with his SID kicking in big time. We left and discovered doors closer to his classroom (YAY!) and walked down to the parking lot. He still screamed a bit in the car, but after I while he calmed.

All in all the night went very well. There are 6 kids in the classroom, including hearing peers. What an awesome number! What concerns us is that the rest of the kids are 4 already. This means that not only is AJ the youngest in age, he's way behind the rest of the class developmentally. I was sort of "studying" the other kiddos last week and I really do think its going to be fine. I know that Mrs. S will make sure AJ is as much part of the class as the other kiddos. I have this fear that his issues will be too great for the school to handle and he'll be out. I know, its a stupid fear. But in all honesty, many people have shown that AJ's issues are too much for them. They either ignore it or him totally, and/or us. While I realize these are professionals, they are humans too. There are bound to be good days and bad days. It's just a stupid fear.

It was wonderful to be around parents of other D/HOH children. We felt like we didn't have to explain anything. And our children's D/HOH was not the focus. We were parents. They were preschoolers. No one asked me what level of hearing loss AJ had. While I'm sure that question will come up, which is no problem, it was still nice not to have that be a prerequisite to speaking to another parent. No one asked us what else was wrong with him. During a conversation with another kiddo's Mom & Dad, the Dad said, "Oh, I think our boys will get along just fine." And I think he's right.

We thought it was sweet when former students of Mrs. S (whom we saw when we observed in January) came in to say hello to Mrs. S...their faces lit up like Christmas trees when she remembered them. I was interested to see how she would incorporate sign language in her classroom. It was so natural, and she did not stop using her voice. Did I mention how awesome she is?!

This is a huge milestone for AJ. And a scary milestone for him Mom. For the last two years, I have done nothing but pour ALL of my energy into providing whatever AJ needs. I will admit that in that I lost a bit of myself...it happens. I wouldn't change it for the world. What a revelation it is to us now why we chose for me to be a stay-at-home Mom. AJ wasn't even in the picture before we decided that. While his schedule has been more than demanding, the benefits he's received make it all worth it. This is the first time we will be dropping him off and letting someone else do the work. While he's been in toddler group, I'm required to stay in the parent observation room. And this is not about a typical "Letting Go" issue. It's just not. It is so much more than that. When you are required to be "ON" all the time, its hard to learn to hit the "SNOOZE" button or *gasp!* the "OFF" button when its not in your routine. I want him to go to school, he needs it and I have no doubt he'll thrive under Mrs. S. He'll do great. And so will his Mom.
Posted by AJ's Mom at 7:34 PM