First Picture of The Schmidt's in the United States 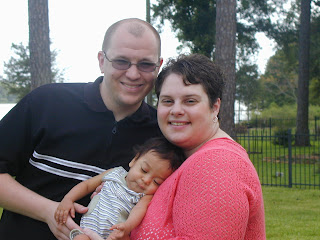 We woke up the next morning and I was still nervous. Jer's cousin's wife noticed and took me to the store to buy some last minute items, things that helped her on their return trip with their children. I was bawling on the way to the airport. When I hugged her, I didn't want to let go. We waited for what seemed like forever to board our plane to Milwaukee. AJ fell asleep on his quilt on the floor. I remember people passing him and saying "Awwww". 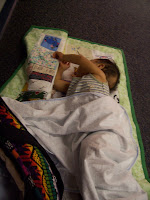 We were lucky to get the bulkhead seats thanks to a very nice couple that ended up behind us. THANK GOD. We began feeding him his bottle, like you normally would and then we got stuck on the tarmat for a very, very, very long time. AJ was sleeping when we finally went up. Whew. The first 1/2 hour of our flight was just fine.

And then AJ started getting sick. I mean sick. I mean violent-projectile-vomiting. And were on a freakin' airplane, how many thousands of feet in the air?! OMG. OMG. Thank goodness for our flight attendant and the fact that no one could see us or hear us/him. He would calm and then start again. This kid was using his whole body and then some. I was running out of wipes and rags and the napkins we were given. We were terrified and didn't know what to do. He finally passed out and we held hands and prayed together that he would stay sleeping and rest until we got to Milwaukee....

He did. As we were deplaning a woman said, "Oh, she's beautiful." I gave a half-smile and walked up to the gate. As I walked "up" I could feel AJ's body tensing up and just knew what was about to happen. I started running as fast as I could to the family bathrooms. Locked. GREAT. Some single guy comes walking out as I'm holding AJ to my chest. Idiot. We took him to the bathroom, stripped him down. I tried to cool him down with wet paper towels as Jer called the pediatricians office.

They told us to withhold liquid for at last an hour and to watch him. If it happened again, we needed to bring him in. Ok. I took off my sweater and ended up sporting a not-so-attractive tank-top. Jer did his best to clean himself up and we tried to pull it together.... After all, we had family and friends waiting for us at the end of the terminal. Not only was our plane late, but we had all this drama with AJ getting sick, we needed to get there ASAP.
We don't remember walking up the terminal. I remember seeing a sign for AJ and then repeating "he was violently ill on the plane" and our family and friends saying "He's so tiny, Oh, he doesn't look good." He was literally a limp noodle on my shoulder. 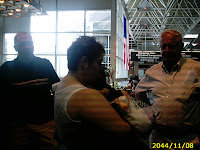 Somehow we ended up with baggage and walking to our car. When we got him into the carseat, we felt a sense of relief. Let's go home. And do absolutely nothing.

He fell asleep almost immediately when we started driving. And then it happened again. And again. And again. We called the pediatrician's office again, which was useless by the way. I felt AJ's forehead and it literally felt like FIRE. I told Jer (who was driving), you choose, Urgent Care or Children's ER. He chose Urgent Care. I have never, never seen him drive so fast.

We pulled in and were seen right away. AJ had a fever over 101, an upper respiratory infection, and double ear infections. His poor little body. He weighed in at 13lbs 8 oz. Thank God the UC doctor was a colleague of Jeremy's, that made it much less nerve-racking. Ok, maybe just a little. He told us we didn't have to see our pediatrician the following day. (We had scheduled the appointment ahead of time as his initial visit). Um, yeah. We decided to still keep that appointment, especially after this incident. He fell asleep again, sleeping the whole way to Walgreens and all the way home. 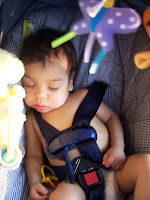 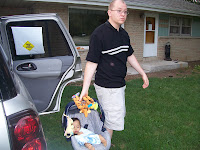 We had never been so happy to be home. We walked him around the house a bit. I rummaged through our carry-on and found "the blanket". We took this blanket on every visit and would bring it home in a zip-loc bag for the dogs. I'd place it in his crib and take it out of the bag a bit, placing it between the slates of AJ's crib and have to dogs come and sniff the crib. (Before each visit I'd wash it!) We did this once a week until he came home. I pulled the blanket out and took it in by the dogs to sniff. Jer brought them out to meet AJ while I was feeding him and all went well. 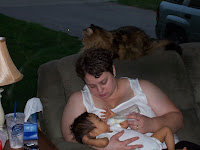 They literally sniffed him and said, "Oh, its you. Ok, you're here. Cool." At least something went right that night. We finished feeding AJ and gave him a cool bath in our bathroom sink. Yep, he fit. We introduced him to his room and soon figured out that two very special animals were not about to leave his side. They were soon dubbed the "Three Amigos". 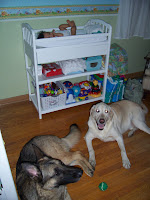 We turned on some lullaby music and placed AJ in his crib for the very first time. 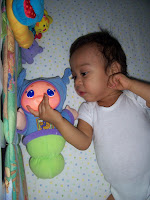 We've never been so excited to see our couch. To read mail. To sit and watch tv and know the channels. We were wired and exhausted at the same time. I think we were up really late that night.

We kept checking on AJ to make sure he was really here. And he was.

We Gotcha, AJ, We Gotcha. 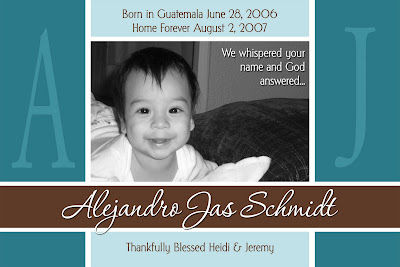