Our tour guide for Antigua arrived at 8am that Thursday morning and we began the hour ride to Antigua. Our guide had been doing this for a few years, speaking Spanish, French, and English. I wish I would have video-taped, or brought a tape recorder to remember all of the facts/trivia/history of Guatemala we learned that day. It was amazing. As we drove toward Antigua, the landscape changed, drastically. Our hotel was an old French Mansion that was conveniently located next to the US Embassy. If any of you have been on Wisconsin Avenue, downtown near Marquette University here in Milwaukee, then you have a pretty good idea of what our street was like. Large statues on the islands inbetween the lanes. A big booming business district. Lots of large office buildings and restaurants. As we kept going, we drove into Zona "X". Guatemala City is split up into Zones (Zonas) that are numbered. This Zone was one of the most dangerous. He said," You don't stop and get out and walk around out here." Yet the Guatemalan people were everywhere.... As we headed out of the city, the road changed from typical concrete to newly paved blacktop. We saw a whole lot of green...and then shacks, constructed in the hilltop, made from thin aluminum sheets. "Do these people have addresses?," I thought. So much for just looking up someone in the phone book. We learned so much about Guatemalan history and culture sitting in the back of that van. As we got closer to Antigua, we saw doors made of various materials. These doors were built into the side of a rock or ground. We saw stray dogs and political posters all over the place. As we pulled into Antigua, our tour guide offered to schedule us a tour of the "still active" volcano to our left. Um, NO. Well pass thanks :) 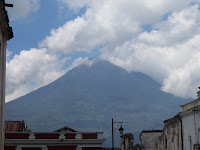 Instead, we drove down miles and miles of cobblestone roads and visited a former hotel which had marimba music in the courtyard, the Jade Factory, a beautiful former monastary, many former convents, and a church that had been destroyed in the war that was being restored. 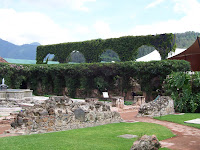 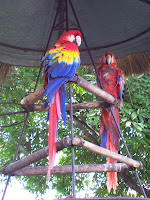 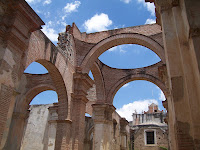 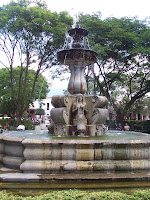 We visited the city square and where many women bring their children as the statue in the fountain represents fertility. We noticed many spanish immersion schools in Antigua. If you want to be somewhere safe in Guatemala, Antigua is it. Many adoptive parents who are able/allowed (and financially able to live in Guatemala for however long) foster their adoptive parents in Antigua. Adoption is "tolerated" much more there. The shops and textiles available were incredible. Most of the vendors had been taught enough English to help their sales. 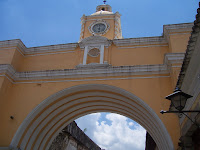 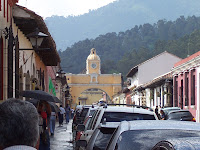 As we were walking to a restaurant for lunch, I saw a girl, and yes I said girl, maybe 12 years old, with a baby on her back. My eyes suddenly filled with tears. How on earth is this happening? I thought about that child, and the child she now carrying on her back...what did their future hold? When we stopped at this "maze" of vendors I saw a woman selling the wraps that most Guatemalan wear to carry their babies. As I was asking to look at some of the different patterns, she began breastfeeding her child (who was in the wrap she was wearing). I was kind of taken back. This is definitely not something normal in American culture. I snapped out of it and continued to talk with her. A few moments later her other child popped out from under the table and said "Hola!" to me. In that moment, I realized this woman was working with her children because she had to. Instantly I wanted to buy every single wrap she had. She was so kind...and I felt so guilty. We had lunch at a fabulous hot spot. We were so glad we invited our guide to dine with us, as our weak Spanish was not working when we tried to communicate with the hostess. It rains every day in Guatemala, usually in the early afternoon. Like clockwork, it rained and those of us that were sitting in the courtyard moved quickly! We visited one last convent and took our final picture as just a married couple. 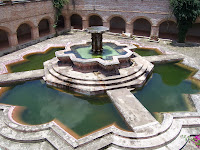 On the way back to Guatemala City we visited some nearby villages. 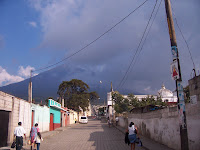 Most of them began with "San". Guatemalan people are so humble. We saw women in one of the village squares washing clothes by hand, on stone boards. We saw children everywhere. We passed a door with a small opening that had bars across it, and there was a little girl staring out at me. So many mixed emotions were felt on this day.

We also passed the land where Starbucks grows their coffee!! 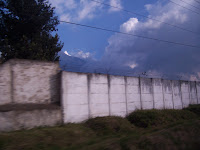 We learned so much. The drive back was very rainy. The twists, turns, ups and downs of the road were not as fun in the rain. We arrived back at the hotel, grateful that we had decided to tour Antigua. Although it is only a glimpse into Guatemalan culture, we certainly have more knowledge and understanding of AJ's birth country than before.

The next day we were going to have our son forever, in a matter of a moment.
Posted by AJ's Mom at 8:47 PM