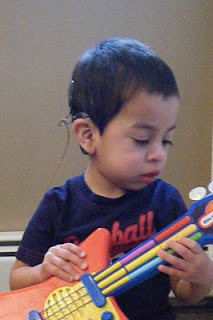 You'll have to imagine the bottom of this photo
(which I cropped).
Think Tom Cruise in Footloose...on a frog potty.
I had promised to post on how we were potty training AJ, and then a friend asked for advice,
so I figured I'd better post or else...
We've been potty training AJ since last December, just after Christmas.  I knew he'd be on break from school until after New Years, so it seemed like the perfect time to hunker down and go for it.
When we began this journey, we didn't know if we would be successful.  With AJ's CP, we didn't know how much bladder control he had to begin with, if any, and/or if control could be mastered.  Would his muscles work correcntly to control potty urges?  We discussed this with AJ's PT at great length, knowing full well it could take up to a year to potty train AJ.
It is now August, and we are still at it, but we're just about there.
He's 4 people.
Cognitively about 2.
He can handle it.
Would it be easier to just keep him in a pull-up? Rarely do I think so.  Honestly.
We put him in big boy undies from the very beginning.  I felt it was crucial that AJ would be able to "feel" when he was wet.  I was right, as he knows he can "go" in a pull-up.  I would much rather rinse and wash undies than change diapers or pull-ups, but thats just me.
We have never used stickers, a sticker chart, M&Ms, or anything enticing.  I'm not a big believer in that.
We watched for AJ's signs of needing to go potty (crossing legs, grabbing) and learned his schedule.  I'm a firm believe of sticking with it. We praise him when he's gone potty.  Quite honestly, washing his hands is enough of a reward for him.
We started with a small potty on the floor (above "frog potty") and then moved on to one of the seats you can place on the toilet.  For as much as we are on the go with therapies, I knew I could not tote around a little person potty with me.
A few weeks ago, I heard a "thud" and had wondered what it was.  AJ had gone into the bathroom, grabbed his seat and put it on the potty, stepped up on the stepstool, pulled down his shorts, and I got in there just in time to help him up on his seat.  I purposely walked into the hallway and waited.  Sure enough, he had gotten off his seat, down the stepstool and came walking out of the bathroom.
He gets it.  He knows.
But he's also a boy.

Who gets busy playing.
We still have accidents.
But we also have more and more days of no accidents.
He's still in pull-ups at night, but we'll get to that.
The communication is what we are working on mostly.  I know when he has to go.  But we're looking for that response when you say "AJ, do you have to go potty?" and teaching him the sign for potty.  We're also still working on getting him to shake his head yes.  He'll shake his head "no" about 50% of when we ask him to say no, so we're almost there.  Sometimes he'll give you a cheesy grin after you've asked if he's got to go, and that means "yes, I'm cute and need to go potty."  This morning I got an arm lift when I asked if he had to go, so we're close.  My goal is to get him to answer consistently...so that when he goes back to school, he can communicate his potty needs.
Potty Like a Rockstar, AJ!
Posted by AJ's Mom at 12:12 PM